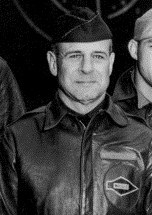 On 18 April 1942, airmen of the US Army Air Forces, led by Lt. Col. James H. (Jimmy) Doolittle, carried the battle of the Pacific to the heart of the Japanese empire with a surprising and daring raid on military targets at Tokoyo, Yokohama, Yokosuka, Nagoya, and Kobe. This historic attack against these major cities was the result of coordination between the Army Air Forces and the US Navy, which carried the sixteen North American B-25 medium bombers aboard the carrier USS Hornet to within take-off distances of the Japanese Islands. Despite the rough seas, this B-25 bomber becomes airborne on the last leg of its journey to the Japanese mainland.