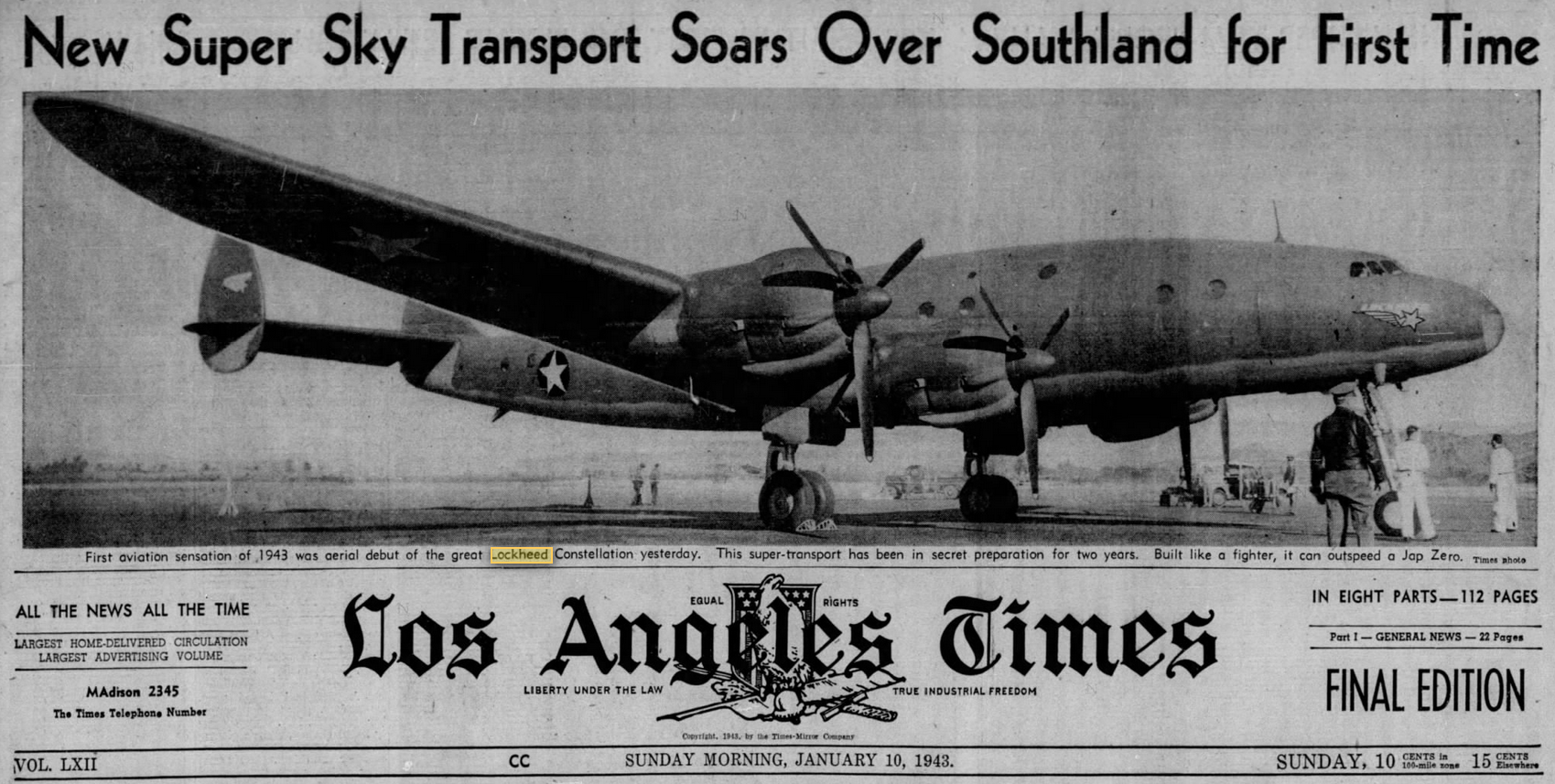 At the controls when the super-transport lifted its tricycle gear in flight were Eddie Allen, Army pilot and veteran four-engine flyer, and Milo Burcham, Lockheed test pilot noted for his substratosphere testing of the P-38. Also in the ship were C.L. (Kelly) Johnson, chief research engineer for the aircraft company; Rudy Thoren, Johnson’s assistant, and Dick Stanton, chief mechanic.#0000ff;">

Throughout World War II, 7,377 of these long range heavy bombers were produced for the Royal Air Force. The majority were powered by Rolls-Royce or Packard Merlin V-12 engines—the same engines that powered the Supermarine Spitfire and North American P-51 Mustang fighters.

The bomber was designed by Roy Chadwick, F.R.S.A., F.R.Ae.S., the Chief Designer and Engineer of A. V. Roe & Company Limited, based on the earlier twin-engine Avro Manchester Mk.I. Because of this, it was originally designated as the Manchester Mk.III, before being re-named Lancaster. Chadwick was appointed Commander of the Most Excellent Order of the British Empire, 2 June 1943, for his work.

The first prototype, BT308, was unarmed and had three small vertical fins.

With the second prototype, DG595, the small center vertical fin was deleted and two larger fins were used at the outboard ends of a longer horizontal tailplane. DG595 was also equipped with power gun turrets at the nose, dorsal and ventral positions, and at the tail.

The Lancaster was designed to carry a 14,000 pound (6,350 kilogram) bomb load, but modified bombers carried the 22,000 pound (9,979 kilogram) Grand Slam bomb. For defense, the standard Lancaster had eight Browning .303-caliber Mark II machine guns in three power-operated turrets, with a total of 14,000 rounds of ammunition.

According to the Royal Air Force, “Almost half all Lancasters delivered during the war (3,345 of 7,373) were lost on operations with the loss of over 21,000 crew members.”

Only two airworthy Avro Lancasters are in existence.

9 January 1914:¹ Georgia Ann (“Tiny”) Broadwick was the first woman to parachute from an airplane in flight. She dropped from an airplane flown by Glenn L. Martin at 2,000 feet (607 meters) over Griffith Park, Los Angeles, California.

A Los Angeles Times reporter, Bonnie Glessner, was also on board. She wrote:

The signal came while he watched below. Just the slight movement of his hand, but the girl understood, and her lips formed a ‘good-by.’

Smiling at me, Tiny stepped off into space, not even a tremor of the machine showing she was gone.

Over the next several years she demonstrated the use of parachutes to the military, and is credited with making the first intentional free-fall descent. By the time she stopped jumping in 1922, Miss Broadwick had made over 1,100 parachute jumps.

Georgia was nicknamed “Tiny” because of her small stature. In a 1963 interview by Ben Runkle for WRAL-TV, Raleigh, North Carolina, she said she was “about 5 feet.”

On 31 July 1905, at the age of 12 years, Miss Thompson was married to William Alsie Jacobs of Durham County, North Carolina, a cotton mill worker who was twice her age. They had one daughter, Verla. They soon were divorced. Mrs. Jacobs supported herself and Verla by working in a cotton mill. (Alsie Jacobs remarried circa 1918. He was killed 15 April 1929 when he was struck by a car in Tarboro, North Carolina.)

Almost every available source states that Georgia was “adopted” or “fostered” by Broadwick. According to information in the 1910 United States Federal Census, however, she was not his daughter, adopted or otherwise, but Mrs. Broadwick. They lived on Garden Street, Elberton, Georgia. Charles M. Broadwick is listed as the head of the household, and she is listed as his wife. Both gave their occupation as “aeronaut,” working in the balloon industry. The census reports that they had been married for 3 years.

Tiny was badly injured at Knoxville, Tennessee, 21 May 1910, when her parachute was carried by winds, dropping her on top of a two-story building. She slid off the roof and fell to the ground, breaking her left arm and sustaining other injuries.

Georgia married Andrew Olsen, a sailor, in 1912. They divorced four years later. In 1916 Tiny married Harry Brown, who worked for the the bus transportation company that would become Greyhound Lines. He died in 1930.

9 January 1793: At approximately 10:00 a.m., Jean-Pierre François Blanchard ascended from the courtyard of the Walnut Street jail in Philadelphia, Pennsylvania, aboard a hydrogen-filled silk balloon. Aboard were various scientific instruments and a small dog.

Blanchard has sold tickets for viewing the balloon launch, and many people were present, including George Washington, who provided Messr. Blanchard with a letter of introduction.

A contemporary newspaper article described the event: [Note, at the time, the English letter ſ (“long s”) was similar to the symbol for “f”.]

The celebrated aeronaut made his 45th voyage in a magnificent balloon, from the Priſon court of the city of Philadelphia, the 9th inſt.  amidſt the acclamations of an immenſe concourſe of ſpectators. His aſcencion was majeſtick; he ſaluted his terreſtial gazers with his flag, and appeared to be as much elated, as he was elevated. At the moment in time when THE PRESIDENT arrived, to be preſent at the inflation of the the baloon, 15 rounds were fired by Capt. Fiſher‘s artillery; two cannon were fired every quarter hour until Mr. B. aſcended, when he was ſaluted with a federal diſcharge. At the date of our accounts, he had not deſcended; and it was impoſſible for anyone to ſay in what direction his car would move; or where he would land. If the wind in the upper atmosphere was fair, he was expected to arrive at New-York at night — The citizens of which place were on the look-out for this unusual viſitant.

The “aerostat” and its passengers rose to an altitude of approximately “200 fathoms” (600 feet, 183 meters) and drifted to the southeast with the air currents. After 46 minutes of flight, Blanchard and his balloon alighted near the village of Deptford, Gloucester County, New Jersey. Though he spoke no English, Blanchard was able to have some local farmers help him return to Philadelphia. Shortly thereafter, he returned to France.