3 October 1942: First successful launch of a prototype Aggregat 4 (A4) rocket, V-4 (Versuchsmuster 4), from Prüfstand VII at Heereversuchanstalt Peenemünde, or HVP, the Army Research Center at Peenemünde on the island of Usedom, off the Baltic coast of Germany.

The rocket engine burned for 58 seconds. The rocket reached an altitude of 85–90 kilometers (53–56 miles), and traveled approximately 190 kilometers (118 miles) downrange. Although V-4 did not reach the Kármán line at 100 kilometers, the currently accepted altitude at which space begins, this Aggregat 4 is still considered to have been the first rocket to reach space.

Major General Walter Doernberger, a German military officer and doctor of engineering who was in command of the V1 and V2 development programs, said, “This third day of October, 1942, is the first of a new era in transportation, that of space travel.”

Development of the A4 began in 1938 under Dr. Frhr. Wernher von Braun. The first prototype, Versuchsmuster 1  (V-1), was being prepared for launch on 18 April 1942. During test runs of the engine, it was badly damaged and was scrapped. Prototype V-2 was launched 13 June 1942 and reached approximately 15,000 feet (4,572 meters), but the guidance system failed and the rocket crashed into the Baltic Sea a short distance from the launch site. V-3 suffered a structural failure, 16 August 1942. V-4, the fourth prototype Aggregat 4, was the first successful flight.

The V2, or Vergeltungswaffen 2 (also known as the A4, or Aggregat 4) was a ballistic missile with an empty weight of approximately 10,000 pounds (4,536 kilograms) and weighing 28,000 pounds (12,700 kilograms), fully loaded. It carried a 738 kilogram (1,627 pound) (sources vary) explosive warhead of amatol, a mixture of TNT and ammonium nitrate. The propellant was a 75/25 mixture of of ethanol and water with liquid oxygen as an oxidizer. 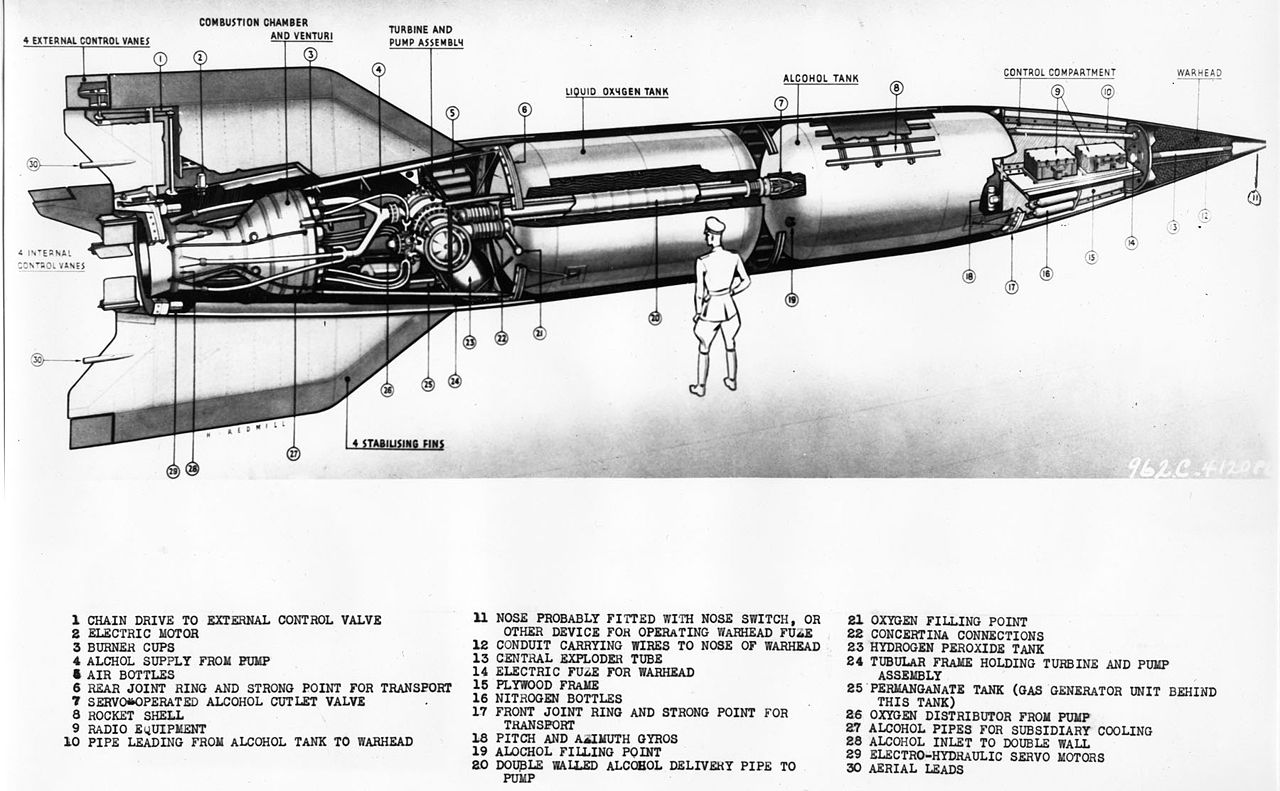