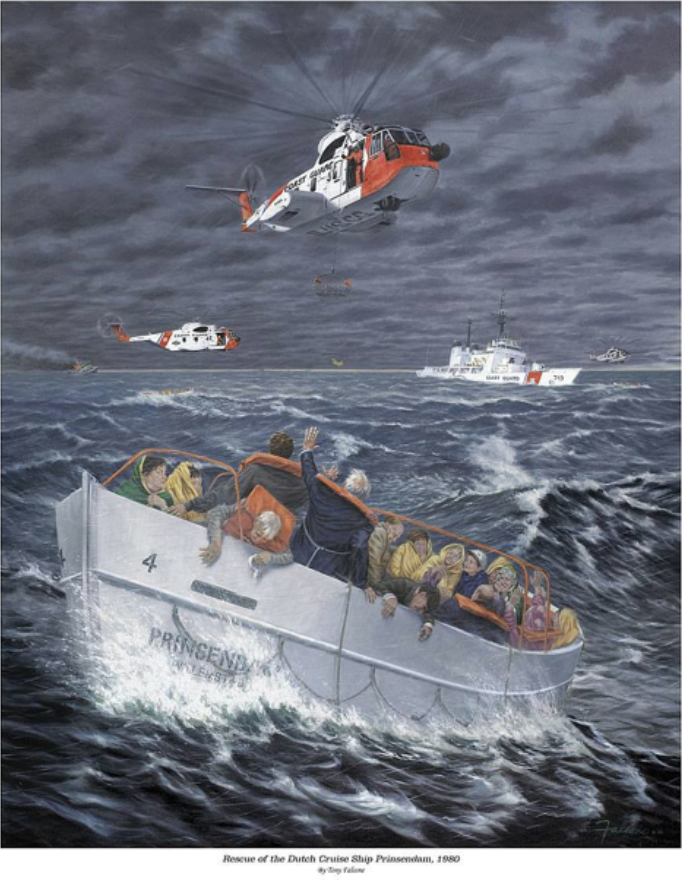 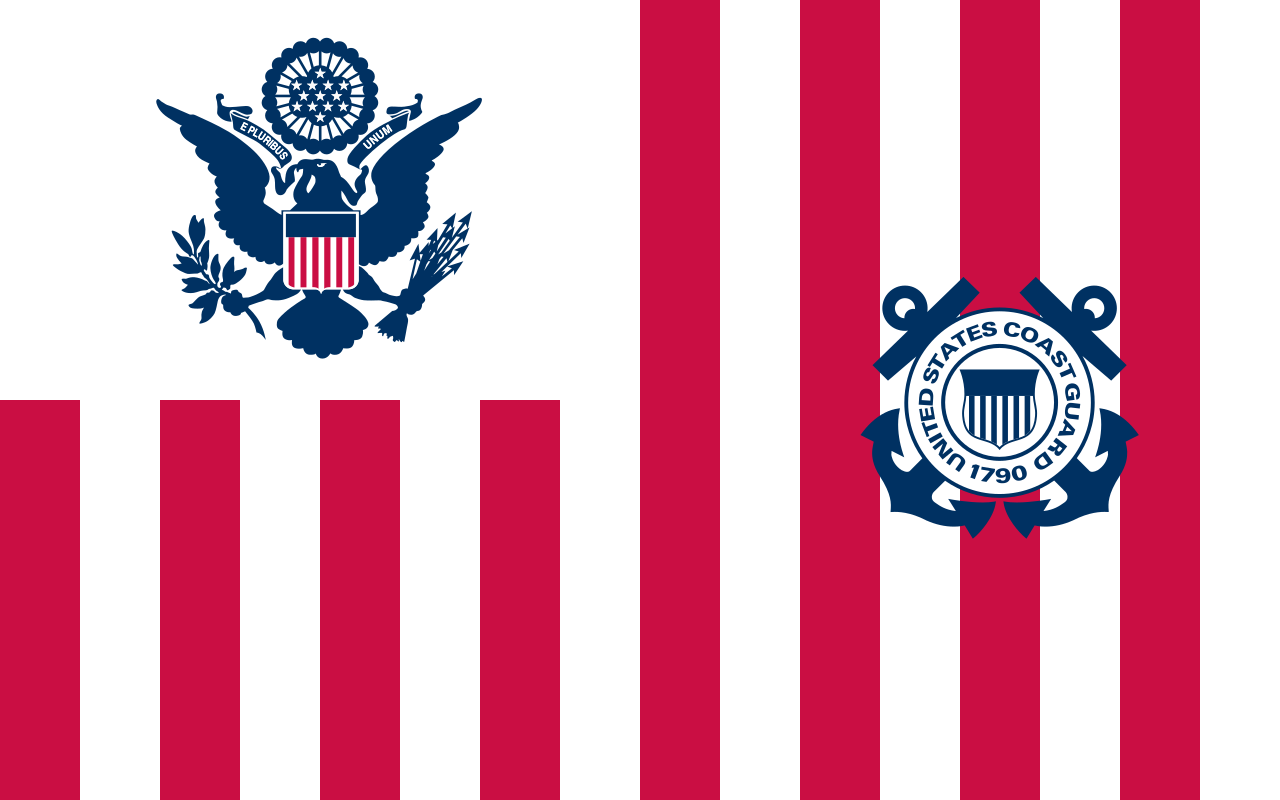 On this day in 1980, the United States Coast Guard led one of the nation’s largest search and rescue cases when the 519 passengers and crew of the Dutch cruise liner PRINSENDAM were forced to abandon ship more than 130 miles (209 kilometers) off the coast of Alaska after an engine room fire spread throughout the vessel. Over the course of 24 hours, rescue aircraft deployed from Coast Guard Air Stations Sitka and Kodiak, AK. would work side-by-side with the U.S. Air Force, Royal Canadian Armed Forces as well as U.S. Coast Guard Cutters BOUTWELL, WOODRUSH, MELLON and an AMVER-tasked (Automated Mutual-Assistance Vessel Rescue System) tanker WILLIAMSBURG to rescue all hands from 12 to 15 foot (18–24 meters) seas and 25 to 30 knot (13–15 meters per second) winds generated by a nearby Arctic typhoon.

The PRINSENDAM was a 427-foot (130 meters) long cruise liner built in 1973. The liner was transiting through the Gulf of Alaska, approximately 120 miles (193 kilometers) south of Yakutat, Alaska, at midnight October 4, 1980, when fire broke out in the engine room. With conditions too dangerous for the deployment of small boats from the ships, most survivors were hoisted and ferried to surface ships while some were ferried to shore during helicopter refuel transits. The helicopters would then refuel and head back out to the scene for their next load of passengers. Still others were forced to climb aboard the tanker and cutters with the help of two Air Force pararescuemen while hypothermic.

The rescue of the PRINSENDAM was particularly significant because of the distance traveled by the rescuers, the coordination of independent organizations and the fact that all 519 passengers and crew were rescued under challenging environmental conditions without loss of life or serious injury.

U.S. Coast Guard rescue coordination centers began receiving Morse code SOS distress signals from the PRINSENDAM reporting a fire onboard a few minutes prior to 1 a.m. Saturday morning October 4, 1980. A few hours later, at 05:08 a.m., with fire visible on deck, 329 passengers were directed to take to lifeboats about 120 miles offshore in the frigid Gulf of Alaska. 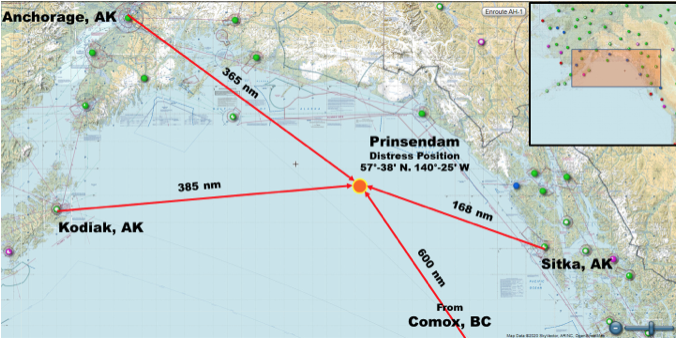 The first 12 to 24 hours of a distress incident offers the best chance of successful rescue and recovery of survivors. After 48 hours chances of a successful rescue and recovery decrease rapidly. The remote and isolated location of the burning PRINSENDAM (and its lifeboats and life rafts) was barely within the timely response capability of the personnel and equipment available. The risks included—but were not limited to—climatic, season, weather, distance from shore and logistics of getting rescue teams and resources to the burning PRINSENDAM’s location. The survivability hazards to both survivors and rescuers included—but were not limited to—remoteness and isolation of the PRINSENDAM’s location from help, water temperature, worsening weather and sea conditions combined with duration the survivors would be vulnerably exposed to the furry of sea and weather. The remnants of Typhoon Thelma heading directly towards the incident area would result in the operational environment becoming more perilous during the on-going rescue operations.

Commander Bruce Melnick, USCG (Retired), who was also designated Coast Guard Astronaut Number 1 in 1992, participated in the rescue as an HH-3F pilot and made the following comments in a 26 October 2016 interview:

“I was on the Prinsendam mission, where there was a Dutch ship from Holland, America cruise lines called the Prinsendam, where I was the SDO that night and we got a call, and the radioman thought the name of the boat was the “Prince and Don” and I said, “Wow. That’s …” and he said, “It’s on fire and it’s out here somewhere.” So, I ran over to the radio room and then I was aware of the cruise ship Prinsendam, how it used to come into the port of Sitka, and so I said … I can’t remember the name of the radioman’s name. I’m sorry. I said but, “That’s the Prinsendam. That’s the big cruise ship and they’re on fire.” So, we talked to RCC and Juno and we launched out, flew out there. They were probably 180 miles away and when we got out there they were listing seriously to starboard and they thought they had the fire out, and then all of a sudden the fire erupted again and the captain of the ship ordered them to abandon ship. When they started to abandon ship, they had all kinds of problems and it was dark at night, and it wasn’t real bad weather yet. There was like a 10-foot swell, but it wasn’t real bad yet. So, we used the night sun ¹ on the H-3 to illuminate the people abandoning ship and we were there until just about everybody got off the ship, and then we were low fuel. By this time, the rest of the resources were being called in.

“The Canadian Forces, the Kodiak Coast Guard, the Elmendorf Air Force Base. I mean we had alerted everybody, and we flew into Yakutat for fuel. We got into Yakutat, we refueled and came back out and by that time, there was a C-130 on scene, some other forces were on scene and the winds had started to pick up real bad. About the time we got on scene, the rest of the helicopters had to go back in for refuel. Now the seas are you know, 15 feet, wind blowing and we looked down and we called back to the on scene commander and said, “We think we need to start hoisting these people,” because the tanker Williamsburg, great big, super tanker was out there and they were trying to get these people over to the side of the ship, the big tanker and climb up the Jacob’s ladders to get up onto the deck of the ship and the average age of these people was 70 years old. So we said, “We think we need to hoist these people,” and I’m not going to mention any names, but he was a senior officer from our air station said, “Whatever you do, don’t hoist those people.” Joel Thuma was the aircraft commander with me, and he was in the left seat at this time, because we had swapped seats, and he says, “Oh …you’re breaking up. I think we’re going to go ahead. I got you, we’re going to start hoisting.” So, we ended up starting the hoisting routine and everybody at the PJ started jumping in. Make a long story short, by the time my day was ended, I’d picked up 115 of the survivors, made multiple trips back and forth to the Williamsburg. At one point they had 24 survivors on the helicopter at one time, and then we took a load back to the Yakutat and anyway, we ended up picking up … we had 519 saves that day. I picked up 115 of them. Great mission and I can talk about that at a great length.”

Aircrew rescue efforts continued around the clock for 24 hours. Despite the hardships and hazards of abandoning ship in the Gulf of Alaska about 120 miles offshore, all crew and passengers of the M.S. PRINSENDAM—329 passengers, 164 Indonesian crew members and 26 Dutch officers—were successfully rescued. With the exception of the U.S. Air Force HH-3E, which included an in-flight refueling probe, fuel endurance was a major factor, the other helicopters hoisted up as many people as they could from the lifeboats and dropped them on U.S. Coast Guard and AMVER surface vessels until they reached their fuel limits and returned to Yakutat, the closest point of land 130 miles away. This event led to the U.S. Coast Guard developing Helicopter In-Flight Refueling (HIFR) from surface vessels and implementing a Rescue Swimmer program. Interestingly, the next morning (05 October), BOUTWELL spotted a flare from a lifeboat containing the final 20 passengers and two Air Force technicians, completing the rescue of all 519 crewmembers and passengers. In 2007, after reaching the remarkable milestone of more than one million lives saved since 1790, the U.S. Coast Guard published a synopsis of the Top 10 rescues in the history of the Service – the PRINSENDAM rescue came in at number 2 behind the 2005 Hurricane KATRINA response. The combination of hardship, hazard, no loss of life, no significant injury has resulted in this incident being considered the greatest air-sea rescue operation in maritime history. 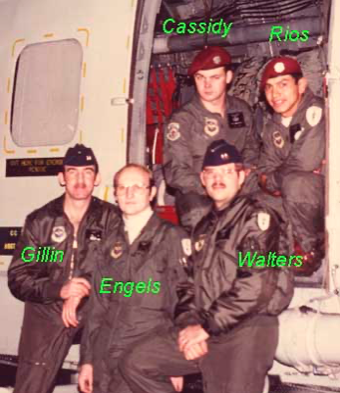 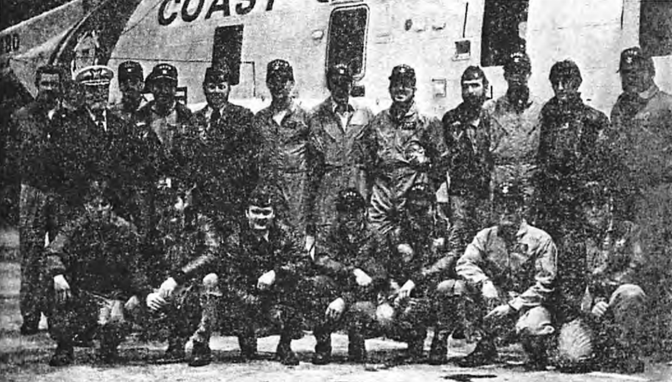 Captain John J. Walters, U.S. Air Force, of the 71st ARRS, was awarded the Mackay Trophy “For extraordinary achievement while participating in aerial flight as HH-3 Helicopter Commander in the rescue of 61, in adverse conditions, from the burning cruise ship Prinsendam.”

The Sikorsky HH-3E (Sikorsky S-61R) earned the nickname Jolly Green Giant during the Vietnam War. It is a dedicated Combat Search and Rescue (CSAR) helicopter flown by the U.S. Air Force, based on the CH-3C transport helicopter. The aircraft is flown by two pilots and the crew includes a flight mechanic and gunner. It is a large twin-engine helicopter with a single main rotor/tail rotor configuration. It has retractable tricycle landing gear and a rear cargo ramp. The rear landing gear retracts into a stub wing on the aft fuselage. The helicopter has an extendable inflight refueling boom (the HH-3F does not have this capability).

The very similar HH-3F Pelican is equipped with radar, an Automatic Flight Control System (AFCS) and a navigation computer, which allowed the helicopter to fly coupled search patterns.

This aircraft is a twin-engine, tandem-rotor search and rescue (SAR) helicopter used by the Canadian Forces from 1963 until 2004. It was a variant of the Boeing Vertol CH-46 Sea Knight designed and built in the United States. A search and rescue version was purchased by the Royal Canadian Air Force in the early 1960s and became known as the Labrador. Soon after, the Canadian Army acquired a troop and cargo version known as the Voyageur. In the mid-1970s, these army machines were replaced by CH-147 Chinook heavy lift and transport helicopters and the Voyageurs were transferred to the air force when Air Command was formed in 1975. They joined the Labradors on search and rescue duties and all were modified to a common search and rescue standard. 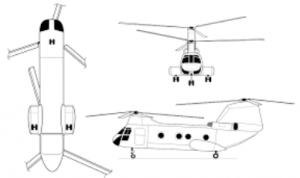 The CC-115 Buffalo plays a critical role in supporting life-saving search and rescue missions. Its agility and all-weather capabilities are well suited for the rough and mountainous terrain on Canada’s West Coast and in northern operations.

The Buffalo is a utility transport aircraft that can take off and land on the most rugged strips as short as a soccer field. It serves a vast territory from the British Columbia / Washington border to the Arctic and from the Rocky Mountains to 1,200 kilometers out over the Pacific Ocean. 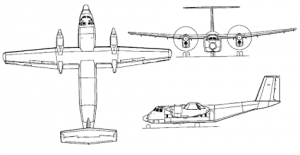 The Canadian-built Canadair Argus was a unique hybrid that married the wings, tail surfaces and undercarriage of the British-designed Britannia transport to a completely new Canadian-designed, non-pressurized fuselage that was equipped with different American-designed engines. One of the most effective anti-submarine warfare aircraft of its day, the Argus was a mainstay for the RCAF in the maritime role. The principal difference between the Mark I and Mark II was in the different internal navigation, communication and tactical electronic equipment. Externally, the Mk II exhibited a redesigned smaller nose radome and additional ECM (electronic counter measures) antennae above the fuselage. The Argus replaced the Lancaster and Neptune aircraft types previously flown in the maritime roles and, eventually, the Argus was itself replaced by the current CP-140 Aurora aircraft.