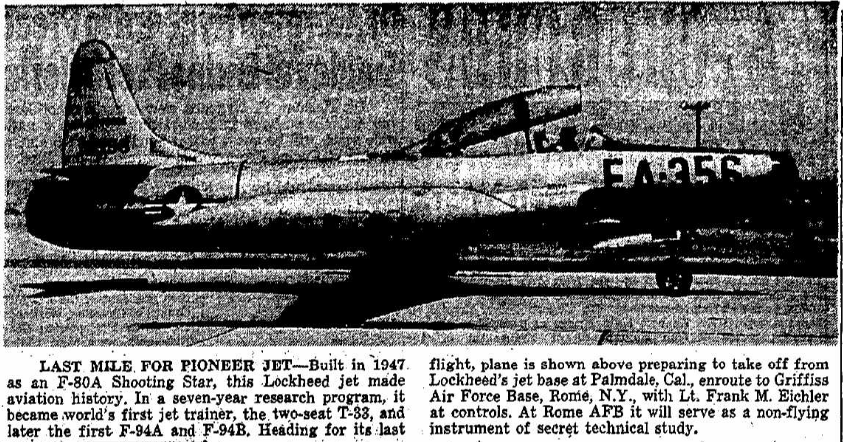 Skyworn and airweary, but still full of flight, the grand-daddy of Lockheed jets has dodged the junkman’s grimy grip and flown proudly from California to new York to sit out the rest of its life on the ground, but still in the service of science. A last minute reprieve from the U.S. Air Force spared from destruction Old Hodgepodge, a research plane that flew as four different models of advanced aircraft designs and led to $500,000,000 worth of jets for United States fighting forces.

Many times modified and too often patched in seven years of aerial contortions, the test jet had been relegated to the scrapheap. It was declared no longer safe for combat or further flight experiment.

But, USAF officials later decided, it could continue in use at Griffiss Air Force Base, Rome, N.Y., as a nonflying instrument of a secret technical study. It was ferried to Griffiss AFB from Lockheed’s Palmdale jet base by Lt. Frank M. Eichler.

How Old Hodgepodge came to such an unusual end is a tale of home [sic] new and better airplanes are born.

The plane was first built in 1947 as an F-80A Shooting Star, America’s first quantity jet design.

Then it was sliced in half to be expanded into the world’s first jet trainer, the two-seat T-33.

Then it donned a new kind of wingtip fuel tank and was the F-94B.

It then took on and tested electronic and rocket inventions designed for the F-94C, today’s all-weather and all-rocket interceptor flying invasion watch from USAF bases.

Yesterday the 40-foot-long jet-job was a brawling daredevil of science that withstood ice and lightning and screeching dives and twisting spins. One minute it was being pampered by research engineers and mechanics, the next it was undergoing aerial wringout at the hands of Lockheed’s best test pilots.

The ship spent 546 hours in the air in tests. It made 772 research flights—773 counting the last-mile dash to New York.

After shaping the course of jet pilot training for most of the world, it helped develop today’s super-performance fighters and even engaged in guided missile experiments.

As the T-33 prototype, it became the dean emeritus of jet trainers. U.S. Air Force, Navy and Marine pilots learned jet flying in its offspring, as did the pilots of a dozen friendly nations.

When fitted with a wooden nose, a model of the first Starfire’s radar nose, it gained the nickname “Pinocchio.”

Then it became the first jet to carry a combination search and rocket fire-control radar system, first jet to have a long clamshell canopy, first to wear a plastic radome nose designed for the Starfire’s radar system.

They gave the plane an afterburner, leading to improvement of the double-jet type engines used in today’s fastest turbine planes.

It flew on a half-dozen different engines. Its power increased from 3800 pounds of thrust to about 6000 pounds.

Moving from scientific job to scientific job, the airplane became an unrecognizable conglomerate. It contained experimental devices applied to no other airplane in the world.

In Lockheed’s test and experimental program, pilots tried to fly the wings off the plane in stability, spin, speed and dive tests.

They caked ice on the wing, nose and cockpit and then used unusual deicing equipment to “defrost” accumulations up to two inches thickness. “Metal sandwich” wings operating on high voltage were one type; a millionth-inch-thick spray was another.

On one derring-do mission, Pilot Stanley Baltz and Engineer E. L. Joiner Jr., purposely flew the airplane in zero visibility through cloud, cold and night when all other planes were grounded—just to ice up the wings and test foul-weather performance.

That night lightning struck and burned a hole in the wing, but Old Hodgepodge flew on in full control.

Eventually it became to fat and sluggish for arduous scientific duties. It was more of a crazy quilt than a magic carpet, no longer fit for any Air Force squadron.

At the end it had to carry 1000 pounds of ballast in its nose to maintain balance in flight. Takeoff weight was up to about nine tons instead of the original seven tons.

Into teh blue she knew so well, the old plane has flown off to anonymity, but—to her everlasting credit—she got there on her own power and her own wings.

16 April 1949: At Van Nuys Airport, California, test pilot Tony LeVier and flight test engineer Glenn Fulkerson made the first flight of the Lockheed YF-94 prototype, serial number 48-356. The aircraft was the first jet-powered all-weather interceptor in service with the United States Air Force and was the first production aircraft powered by an afterburning engine.

It was initially thought that the project would be a very simple, straightforward modification. However, the increased weight of guns and electronics required the installation of a more powerful engine than used in the T-33A. The new engine required that the aft fuselage be lengthened and deepened. Still, early models used approximately 80% of the parts for the F-80C fighter and T-33A trainer. The Air Force ordered the aircraft as the F-94A. Improvements resulted in an F-94B version, but the definitive model was the all-rocket-armed F-94C Starfire.

Adapted from a single-seat P-80C Shooting Star jet fighter, Lockheed engineers added 38.6 inches (0.980 meter) to the fuselage forward of the wing for a second cockpit, instrumentation and flight controls, and another 12 inches (0.305 meter) aft. A more powerful engine, an Allison J33-A-23 with 4,600 pounds of thrust, helped offset the increased weight of the modified airplane. Internal fuel capacity decreased 72 gallons (273 liters) to 353 (1,336 liters).

While the P-80 fighter was armed with six .50-caliber machine guns in the nose, the trainer was usually unarmed. Two machine guns could be installed for gunnery training.

In production for 11 years, 5,691 T-33As were built by Lockheed, with licensed production of another 656 by Canadair Ltd., and 210 by Kawasaki Kokuki K.K. For over five decades, the “T-Bird” was used to train many tens of thousands of military pilots worldwide.

TF-80C 48-356 was rebuilt as the prototype for Lockheed’s YF-94A interceptor, and then modified further to the F-94B. Sources have reported it as being stored at Edwards Air Force Base, California.