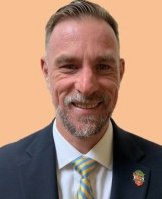 NOTE: After 8+ years and 1,524 published posts, This Day in Aviation is going to try something new today. TDiA was contacted by a regular reader with a suggestion for a new post. He was so knowledgeable about the incident, that rather than reinvent the wheel, I asked him to write the following article. I hope that you find it as interesting as I did. Please welcome our first guest author, Captain Sean M. Cross, United States Coast Guard (Retired), and now the President and COO of Helinet Aviation Services, Van Nuys, California. —Bryan 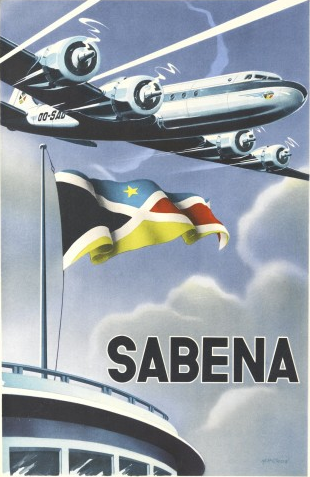 A little after 8:00 p.m., Tuesday, 17 September, OO-CBG departed Shannon for the overnight flight to Gander. The Douglas Skymaster was under the command Captain Jean Ester, a Belgian who had flown with the Royal Air Force during World War II. The co-pilot was Albert Drossaert; with Leopold Verstraeten, navigator; Paul Fassbender, flight engineer; and radio operator Jean Dutoict. There were two flight attendants , Jeanne Bruylant and Jean Rookx, and 37 passengers.

OO-CBG was due at Gander at 0720, Wednesday morning. At 0737, the flight reported by radio, estimating that it was 16 minutes out.

The Skymaster crashed during harsh weather 24 miles (39 kilometers) southwest of Gander. An inbound Transcontinental and Western Airlines (TWA) DC-4 located the crash site and remained overhead until a United States Coast Guard Consolidated PBY-5A Catalina flying boat, serial number 48314 (c/n 1506) from Air Detachment Argentia, arrived over the scene and confirmed that the wreckage was that of the missing SABENA airliner and that survivors were seen.

The crash site was heavily wooded and the ground proved to be a very large bog. As the aircraft could not land, emergency aid supplies were dropped by parachute and plans were formulated to rescue the survivors.

A PBY-5A with a U.S. Army medical team from Fort McAndrew, Argentia, under the command of Captain Samuel Preston Martin III.M.D., U.S. Army, landed on Dead Wolf Pond, a lake about one and a half miles (2.4 kilometers) long, located five miles (8 kilometers) from the crash site.

With the assistance of experienced woodsman from Gander, Dr. Martin and his medical team began the hazardous trip down a river known as Dead Wolf Brook from the lake to an area near the crash site. Martin’s team then made their way by foot through the boggy area to the DC-4 and the survivors.

Dr. Martin determined that many of the severely injured would not survive the rugged overland trip upriver and that some other way had to be found to extract the survivors and rescuers.

The U.S. Coast Guard decided to use helicopters to carry out the survivors. The nearest  were located at the Coast Guard Air Stations, Brooklyn, New York, and Elizabeth City, North Carolina, in the United States. In fact, these were the only helicopters operating in the Coast Guard at the time.

Helicopters were just out of their infancy in 1946, moving into the adolescent stage—Igor Sikorsky had made the first helicopter flight just six years earlier. [See TDiA, 14 September 1939] However, the U.S. Coast Guard had pioneered helicopter development alongside Sikorsky as the military service responsible for the testing and evaluation of helicopters during the latter years of World War II. This would be their first large scale rescue which would prove the helicopter’s amazing capabilities.

On 20 September 1946, two days after the airliner crashed, orders were received from the East Area Rescue Officer, Captain Richard L. Burke, U.S. Coast Guard, to prepare a Sikorsky R-4/HNS-1 helicopter for immediate shipment to Gander to take part in the rescue of survivors of a crashed Belgian airliner. Instructions were given by telephone to Lieutenant Alvin Nightingale Fisher, USCG, at Elizabeth City to begin disassembly of an HNS-1 for transport aboard a C-54 Skymaster (the military version of the Douglas DC-4). No details were available on the orders for Air Station Brooklyn, New York.

An Army Air Forces C-54 from Westover Field, near Springfield, Massachusetts, arrived at Elizabeth City at 9:25 p.m., local time, on the 20th. The disassembled fabric-covered HNS-1, serial number 39051, and its crew were loaded aboard and the transport departed at 11:25 p.m. for the 1,215 nautical mile (1,298 statute miles/2,250 kilometers) journey, landing at Gander at 8:55 a.m., the next morning. The helicopter was unloaded and assembly began at once.

While the helicopter was being reassembled, the pilots were taken to the scene of the crash by a PBY from Argentia, and plans were laid for flying the survivors out by helicopter. It was decided to drop lumber at the clearing nearest the crash for the purpose of constructing a small landing platform as the muskeg would not support the weight of the helicopter. A second platform was built on the edge of the lake approximately 7 miles (11 kilometers) from the clearing so that survivors could be transferred  at this point to PBYs and flown to Gander.

While the Elizabeth City Sikorsky HNS-1 was being prepared for flight, another helicopter, the metal-clad Sikorsky R-6/HOS-1, serial number 23470, a newer and more powerful machine, was also on the scene being readied. The HOS-1 from Air Station Brooklyn arrived at Gander some twenty minutes before the Elizabeth City machine and was reassembled and ready for flight before the HNS-1.

Taking the helicopters apart in order to airlift them on transport aircraft, then putting them back together on arrival at Gander was critical to the operation. After reassembly of the Elizabeth City and during the run-up prior to its test flight, someone approached too close to the turning rotors and the test pilot did an emergency shut down. This caused a pin to shear and it was dark before the trouble could be remedied.

The Brooklyn HOS-1 managed to evacuate 8 people before dark on the 21st, all of whom had to be carried by stretcher due to the severity of their injuries.

The next day, the 22nd, both helicopters were used to fly out the remaining survivors by making  repeated flights between the crash site and Gander Lake, a distance of about 12 miles (19 kilometers). The 18 survivors were placed in wire Stokes litters attached to the outside of the HNS-1 helicopter, and inside the hastily-modified HOS-1. One at a time they were flown to Wolf Lake where they were further stabilized by the U.S. Army medics. The survivors were then placed in inflatable life rafts and rowed out to a PBY-5A on the lake. They were taken aboard the amphibian and flown to Gander Airport where they were able to receive more extensive medical care.

The helicopters and PBY-5As made numerous trips before all eighteen survivors were evacuated to Gander Airport. In addition, the helicopters withdrew the fourteen members of the Army’s ground rescue team, and several others. The following day, after all survivors had been flown out, the investigators and airline officials were flown in by helicopter. In all, the helicopters made forty flights into the clearing. Landings, both at the clearing and at the lake, were made on the wooden platforms, thus permitting maximum performance of the helicopters.

The aircrews received the U.S. Air Medal, while the government of Belgium presented the Chevalier (Knight) of the Order of Leopold to all for the rescue.

Captain Frank Arthur Erickson, United States Coast Guard. (6 November 1907–17 December 1978) Captain Erickson was designated Coast Guard Aviator No. 32 in 1935, and later, Coast Guard Helicopter Pilot No. 1. On 3 January 1944, then Commander Erickson carried out the first-ever helicopter life saving mission when he delivered plasma for the survivors of USS Turner (DD-648) from Battery Park, New York, to a hospital at Sandy Hook. This occurred during a severe snow storm. Captain Erickson is internationally recognized for his pioneering efforts of helicopter rescues, hydraulic hoist systems, and flight stabilization systems. Erickson Hall at the Aviation Training Center, Mobile, Alabama, where the Coast Guard aircraft flight simulators are located, was named in his honor. Captain Ericson graduated from the U.S. Coast Guard Academy in 1931 and was commissioned an ensign. He served until retirement in 1954.

Lieutenant Commander August (“Gus”) Kleisch, United States Coast Guard. (2 October 1908–26 October 2003) Lieutenant Commander Kleisch was designated as an Enlisted Aviation Pilot in 1935, and after commissioning in 1942, Coast Guard Aviator No. 109. In 1943, at Coast Guard Air Station Brooklyn (located at Floyd Bennett Field, Brooklyn, New York, he qualified as Coast Guard Helicopter Pilot No. 5. In 1945, “Gus” Kleisch pioneered the first use of a training helicopter to rescue seven crewmembers of a Canadian PBY flying boat which had been forced down in a remote area of Labrador. He also delivered two medical officers to the scene. For his heroism and innovation, he was awarded the Distinguished Flying Cross by the U.S. Navy, and the Royal Canadian Air Force Cross by Prime Minister of Canada. He was appointed Chevalier de l’Ordre de Léopold (Knight) by Prince Charles, Regent of Belgium, for the rescue of the SABENA survivors. Lieutenant Commander Kleisch served in the United States Coast Guard from 1927 until he retired in 1959.

The Vought-Sikorsky VS-316A (which was designated XR-4 by the U.S. Army Air Corps and assigned serial number 41-18874), established the single main rotor/anti-torque tail rotor configuration. It was a two-place helicopter with side-by-side seating and dual flight controls. The fabric-covered three-blade main rotor was 38 feet (11.582 meters) in diameter and turned counter-clockwise as seen from above. (The advancing blade is on the helicopter’s right). The three-blade tail rotor was mounted to the right of the tail boom in a tractor configuration, and rotated clockwise when seen from the helicopter’s left side. (The advancing blade was below the axis of rotation.)
The XR-4 was 33 feet, 11.5 inches (10.351 meters) long and 12 feet, 5 inches (3.785 meters) high. It weighed 2,010 pounds (911.7 kilograms) empty and the maximum gross weight was 2,540 pounds (1,152.1 kilograms).
The VS-316A had originally been powered by a 499.8-cubic-inch-displacement (8.19 liter) air-cooled Warner Aircraft Corporation Scarab SS-50 (R-500-1) seven-cylinder radial engine, rated at 145 horsepower at 2,050 r.p.m. In the XR-4 configuration, the engine was upgraded to an air-cooled, direct-drive 555.298-cubic-inch-displacement (9.100 liter) Warner Super Scarab SS185 (R-550-3) seven-cylinder radial engine with a compression ration of 6.20:1. The R-550-3 was rated at 185 horsepower at 2,175 r.p.m. at Sea Level, and 200 horsepower at 2,475 r.p.m (five minute limit) for takeoff. The engine was placed backwards in the aircraft with the propeller shaft driving a short driveshaft through a clutch to a 90° gear box and the transmission. The R-550-3 weighed 344 pounds (156 kilograms).
The XR-4 was redesignated XR-4C. This would be the world’s first production helicopter. It is at the Steven F. Udvar-Hazy Center of the Smithsonian National Air and Space Museum.
Sikorsky designed the HOS-1(R-6) as a follow on to his fabric covered HNS-1 (R-4). While retaining the R-4’s rotor and transmission system, the R-6 had an all-metal fuselage. In October 1944 the first of three XHOS-1 were delivered to the US Navy and transferred to the US Coast Guard Air Station Brooklyn, Floyd Bennett Field, for test and evaluation. One of these crashed.
The Navy then acquired 36 HOS-1 (R-6A) from the Army Air Force which were purchased by the Coast Guard between January 1945 and January 1946. Of these, two were destroyed in crashes (no fatalities), and the majority of the remaining helicopters were returned to the Navy or disposed of with the closing of the helicopter training school.
On 18 June 1946 CDR Erickson was moved to the Coast Guard Elizabeth City air station. His downsized Helicopter Test and Development Unit consisted of a small group of dedicated personnel, one hangar, one HNS and two HOS helicopters. This was the thread that kept the Coast Guard helicopter program alive.
General characteristics
Crew: one
Capacity: one observer
Length: 47 ft 11 in (14.61 m)
Gross weight: 2,600 lb (1,179 kg)
Powerplant: 1 × Franklin O-405-9 piston, 240 hp (180 kW)
Main rotor diameter: 38 ft 0 in (11.58 m)
Performance
Maximum speed: 100 mph (160 km/h, 87 kn) – this new aircraft could attain 100 mph compared with 82 mph by the earlier design.
Service ceiling: 10,000 ft (3,000 m)
© 2020, Sean M. Cross