AMONG the many extraordinary flights which have been accomplished, certainly not the least epoch-making, inasmuch as it was the first flight from England to Germany, was that made by Mr. Gustav Hamel last week, with a passenger, from Dover to Cologne. Starting from Dover Aerodrome (accompanied by Mr. F. Dupree, of the staff of the Standard, by whom arrangements for the flight had been made), he left Dover as 12.40 p.m. Making his way across the Channel, the French coast was picked up just south of Dunkirk, and then a course was set by the aid of the compass for Mechlin. Across Belgium and Holland the military Blériot sped its way, but the storms which had to be passed through put the pilot out a little in his reckoning, and when the Rhine was sighted it was at a point about 60 miles north of Cologne. This deviation lengthened the journey considerably, but Cologne was safely reached at 4.58 p.m., and on alighting the English travellers were courteously received by the German officers. The duration of the flight was 4 hrs. 18 mins., and the distance as the crow flies from point to point is 245 miles. In view of the deviation, Mr. Hamel estimates the distance covered at 320 miles. Altogether, Mr. Hamel passed over five countries. 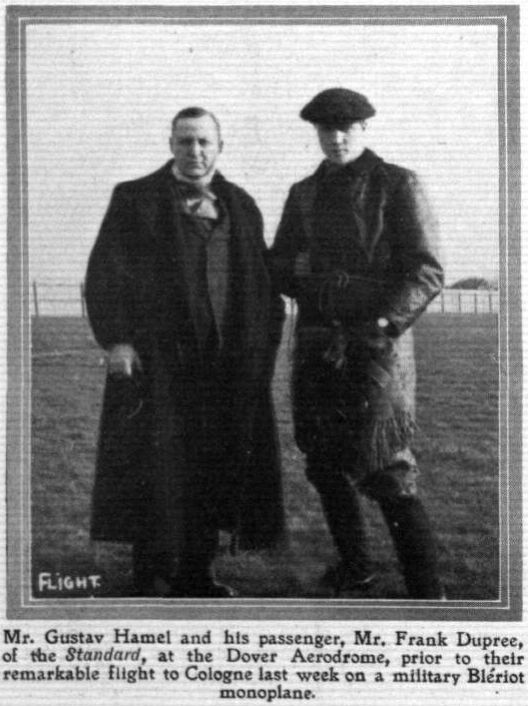