12 June 1955:  On Sunday morning, 12 June 1955, Cessna Aircraft Company test pilot Emil Brown (“Fritz”) Feutz, took off from Cessna Aircraft Field (CEA), southeast of Wichita, Kansas, with the new prototype Model 172, N41678, and flew west to a grass runway near Kingman, Kansas, approximately 48 miles (78 kilometers) to the west. Also on board was an observer, D.G. Underwood. The airplane was stored in a small hangar. Feutz conducted the flight and certification testing at Kingman.

N41678, serial number 612, was originally a prototype for the Model 170C “tail-dragger.” It featured new, straight tail surfaces, in place of the classic rounded style. The airplane was then modified with tricycle-configuration landing gear. With the airplane in a horizontal attitude, the pilot had better visibility while on the ground. Taxiing, takeoff and landing were much easier. Flight testing showed that the increased drag slowed the 172 by about 5 miles per hour (8 kilometers per hour) when compared to the 170.

The Civil Aeronautics Administration (predecessor to the Federal Aviation Administration) approved the airplane’s type certificate, 3A12, on 4 November 1955.

The Cessna 172 was an immediate success, with 1,174 being produced in 1956. Total production of the original model was 3,808, before production changed to the Model 172A in 1960. During the 1960s, Cessna began marketing the airplane with the name Skyhawk.

The 172 was in production from 1956 until 1986, when product liability lawsuits made the cost of the airplane unaffordable. Production resumed in 1996 and continues today. More than 44,000 have been built in at least 24 variants by Cessna and its licensee, Reims Aviation Industries, in France. This is greater than any other aircraft type, and only the Lockheed C-130 Hercules has been in production longer.

The Cessna 172 is a single-engine, four-place, high-wing, all-metal light airplane with fixed tricycle landing gear. The first production airplane was serial number 28000, registered N5000A. (This airplane is currently registered to an owner in Quincy, Illinois.) The list price in 1956 was $8,995.

Emil Brown Feutz was born at Wichita, Kansas, 1 July 1923. He was the son of Wallace Frederic Feutz and Lelah Mae Brown Feutz. He attended the Missouri Military Academy, a private college preparatory school at Mexico, Missouri.

In 1941, “Buddie” Feutz entered the University of Missouri, Columbia, Missouri, as an engineering student. He was a member of the Sigma Nu (ΣΝ) fraternity.

Feutz was a member of the Class of 1945, but World War II interrupted his college plans. He enlisted in the United States Army at Jefferson Barracks, south of St. Louis, Missouri, on 25 January 1943. U.S. Army records say that was 6 feet, 0 inches (1.828 meters) tall and weighed 143 pounds (65 kilograms).

On 18 September 1949, Emil Feutz married Miss Dorothy Jean Estep, who was also at the University of Missouri, and an employee of LIFE Magazine. They would have four children.

Following the war, Feutz returned to the University of Missouri. He was a member of the American Society of Mechanical Engineers and the Engine Club. He graduated with a Bachelor of Science Degree in Mechanical Engineering (B.S.M.E.) in 1952.

Fritz Feutz worked as an aerodynamicist and flight test engineer for the Beech Aircraft Corporation, 1950 to 1953. He flew as a test pilot for Cessna from 1953 until 1957, then went to the McDonnell Aircraft Company at St. Louis, Missouri. In 1961, Feutz founded his own company, Testair, Inc., also in St. Louis. He was a member of the Society of Experimental Test Pilots.

Emil Brown Feutz died at his home in Columbia, Missouri, 1 September 2013, at the age of 90 years. He was buried at Elmwood Cemetery, Mexico, Missouri.

¹ “0-300-A is similar to C145-2 except parts material and ignition component substitutions.” —TYPE CERTIFICATE DATA SHEET NO. E-253 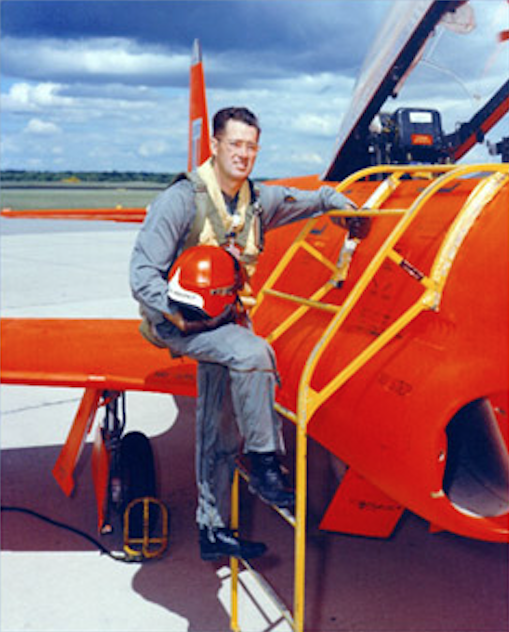