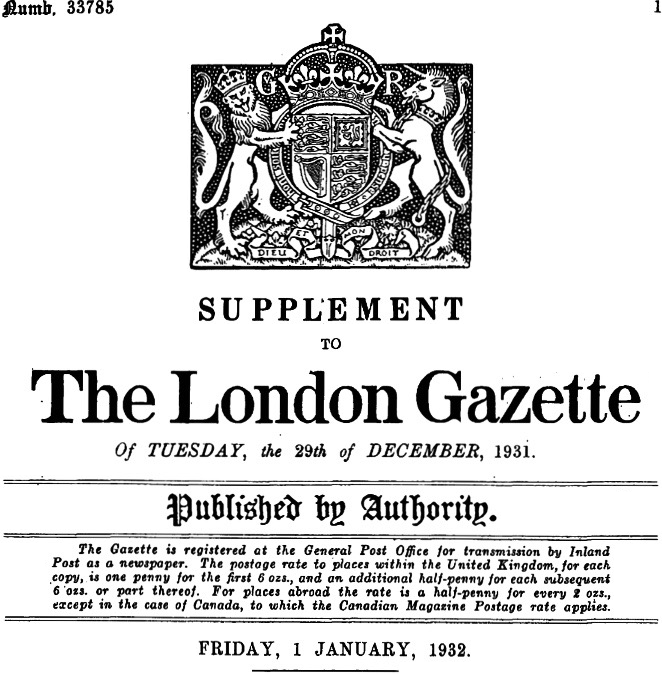 To be Commanders of the Civil Division of the said Most Excellent Order:

13 November 1926: The 1926 race for the Coupe d’Aviation Maritime Jacques Schneider (the Schneider Trophy) was held at Hampton Roads, a large natural harbor between southeastern Virginia and northeastern North Carolina, two states on the Atlantic coast of the United States. There were an estimated 30,000 spectators. The race consisted of seven laps of a 50 kilometer (31 miles) triangular course.

The location of each race went to the country whose national team had won the previous year. Lieutenant James H. Doolittle, Air Service, United States Army, had won the 26 October 1925 race at Baltimore, Maryland, flying a Curtiss R3C-2 to an average speed of 232.57 miles per hour (374.29 kilometers per hour).

The 1926 Schneider Race included three Italian and three American airplanes. The British team’s aircraft were not ready so they did not compete.

The race was delayed for two days because of adverse weather conditions. The race began at 2:35 p.m. on Saturday afternoon, with the first of three Italian racers entering the course.  Airplanes departed at intervals to avoid coming too close to each other while flying the course.

Macchi M.39 MM.76 is in the collection of the Aeronautica Militare museum.

Mario de Bernardi served in the Italian Army during the Italo-Turkish War, 1911–1912, and became a pilot during World War I. He rose to the rank of colonel in the Regia Aeronautica. He set several world aviation records and continued his work as a test pilot. He died in 1959 at the age of 65 years.

Christian Frank Schilt enlisted as a private in the U.S. Marine Corps in 1917. He was awarded the Medal of Honor for his actions in Nicaragua, 6–8 January 1928. During World War II, Schilt served as Commander, Marine Air Group 11 during the Solomons Campaign, and later went on to command Aircraft, Fleet Marine Force, Pacific. He retired from the Marine Corps with the rank of General in 1957, and died in 1987 at the age of 91 years.

William Gosnell Tomlinson was a 1919 graduate of the United States Naval Academy. During his career in the U.S. Navy, he commanded the aircraft carrier USS Belleau Wood (CVL-24), Carrier Division 3, USS Boxer (CVA-21), USS Bon Homme Richard (CVA-31) and served as Commander, Task Force 77 (CTF 77) during the Korean War. During World War II, Tomlinson was awarded the Navy Cross, and twice, the Legion of Merit with Combat “V”. He retired in 1953 as a Vice Admiral, and died in 1972 at the age of 75 years.

4 November 1927: At Venezia, Mario de Bernardi flew a Macchi M.52 seaplane to a new Fédération Aéronautique Internationale (FAI) World Record for Speed Over a 3 Kilometer Course of 479.29 kilometers per hour (297.82 miles per hour).¹

Aeronautica Macchi built three M.52 seaplanes for the Regia Aeronautica (the Italian Air Force) for use in the 1927 Schneider Trophy Races. The M.52 was designed by Mario Castoldi. Like the earlier M.39, it was a single-place, single-engine, low-wing monoplane float plane constructed of wood and metal.

The three racers were each powered by a 2,116.14-cubic-inch-displacement (34.677 liter) liquid-cooled Fiat Aviazone AS.3 dual overhead camshaft, four-valve 60° V-12 engine which produced 1,000 horsepower at 2,400 r.p.m. The design of the AS.3 was based on the Curtiss D-12, although it used individual cylinders and water jackets instead of the American engine’s monoblock castings.

“. . . according to reports Lieut. Doolittle’s cornering was superb, and must have been to a great extent responsible for the excellent performance. Reports from America—coming, it is thought, from a reliable source—indicate that one particular engine out of the 12 built for the Pulitzer and Schneider Trophy races proved exceptionally good, as will often happen in a batch of engines, and it is believed that this engine was fitted in Doolittle’s Curtiss-Army Racer. This fact, taken in conjunction with the masterly handling of the machine, would seem to account for the wholly unexpected average speed maintained, which was, of course, far and away ahead of the speeds of the British and Italian competitors.”

The R3C-2 was a single-engine, single-seat, single-bay biplane, equipped with pontoons for taking off and landing on water. It was built especially for air racing. Two R3Cs were built for the United States Navy and one for the Army. (The Army aircraft is identified by a Navy Bureau of Aeronautics serial number (“Bu. No.”) A-7054. It does not seem to have been assigned an Air Service serial number.) The airplane and its V-1400 engine were both built by the Curtiss Aeroplane and Motor Company, which had been founded by Glenn Hammond Curtiss. The R3C-2 was converted from the R3C-1, the land plane configuration which had been flown by Lieutenant Cyrus Bettis, AS, USA, to win the Pulitzer Trophy Race just two weeks earlier.

Constructed of wood, the fuselage has four ash longerons and seven birch vertical bulkheads. The framework is covered with two layers of 2-inch (51 millimeter) wide, 3/32-inch (2.38 millimeter) thick spruce strips. These were placed on a 45° diagonal from the fuselage horizontal centerline, with the second layer at 90° to the first. These veneer strips were glued and tacked to the frame. The fuselage was then covered with doped fabric. The wings and tail surfaces are also of wood, with spruce ribs and a covering of spruce strips.

The single-bay wings are wire braced and contain surface radiators made of thin brass sheeting. The radiators contained 12 gallons (45.4 liters) of water, circulating at a rate of 75 gallons (283.9 liters) per minute. By using surface radiators to cool the engine, aerodynamic drag was reduced.

He was a highly-educated military officer, having earned his Bachelor of Arts from the University of California Berkeley School of Mines, and M.S and D.Sc. degrees in Aeronautical Engineering from the Massachusetts Institute of Technology.

During World War II, Colonel Doolittle planned and led the famous Halsey-Doolittle Raid against Japan, 18 April 1942, for which he was awarded the Medal of Honor.

Cyrus Bettis had previously won the 1924 Mitchell Trophy Race, sponsored by Brigadier General Billy Mitchell in honor of his brother, John L. Mitchell, who was killed during World War I.

The Curtiss R3C-1 was a single-place, single-engine, single-bay  biplane built for especially for air racing.  Two were built for the United States Navy and one for the Army. (The Army aircraft is identified by a Navy Bureau of Aeronautics serial number (“Bu. No.”) A-7054. It does not seem to have been assigned an Air Service serial number.) The airplane and its V-1400 engine were built by the Curtiss Aeroplane and Motor Company, which had been founded by Glenn Hammond Curtiss. It was converted to a seaplane configuration with two single-step pontoons, the R3C-2, for the Schneider Trophy Race, two weeks later, 25 October.

Constructed of wood, the fuselage had four ash longerons and seven birch vertical bulkheads. The framework was covered with two layers of 2-inch (51 millimeter) wide, 3/32-inch (2.38 millimeter) thick spruce strips. These were placed on a 45° diagonal from the fuselage horizontal centerline, with the second layer at 90° to the first. These veneer strips were glued and tacked to the frame. The fuselage was then covered with doped fabric. The wings and tail surfaces were also of wood, with spruce ribs and a covering of spruce strips.

After the Pullitzer race, the R3C-1 was reconfigured as a seaplane for the Schneider Trophy Race. The fixed landing gear was replaced by two single-step pontoons and the airplane was redesignated R3C-2. Additional fuel was carried in the pontoons. On 26 October 1925, 1st Lieutenant James H. Doolittle flew the airplane to win the Coupe d’Aviation Maritime Jacques Schneider at Chesapeake Bay, Maryland.

The R3C-2 is in the collection of the Smithsonian Institution National Air and Space Museum.

Cyrus Bettis was born 2 January 1893, at Carsonville, Michigan, the first of three children of John Bettis, a farm worker, and Mattie McCrory Bettis.

Cyrus Bettis has gone to Detroit and enlisted in the Aviation Corps of Uncle Sam’s service.

He expects to be called to service at any time and will probably go East for training. Cyrus has been the efficient and genial manager of the Michigan State Telephone exchange in Fenton for several years. He has made an excellent manager and entrenched himself in the good graces of his patrons and Fenton People in General. —Fenton Independent.

On 23 August 1926, flying from Philadelphia to Selfridge Field in Michigan, Bettis flew into terrain in fog in the Allegheny Mountains of western Pennsylvania. With a fractured skull and broken left leg, Bettis crawled several miles to a roadway where he was found, 43 hours after the crash.

Bettis was taken by air ambulance to Walter Reed Army Hospital, but died of spinal meningitis resulting from his injuries, 1 September. He was buried at the Lakeside Cemetery, Port Huron, Michigan.