21 November 1970: Operation Kingpin was a mission to rescue 61 American prisoners of war at the Sơn Tây Prison Camp, 23 miles (37 kilometers) west of Hanoi, North Vietnam. There were over 12,000 North Vietnamese soldiers stationed within five miles of the prison. The ultra-secret mission was carried out by 56 U.S. Army Special Forces soldiers and 98 airmen aboard 28 aircraft.

Months of intelligence gathering, mission planning and meticulous training preceded the mission. Personnel were selected from more than 500 volunteers. Training was conducted at Duke Field, an auxiliary field at Eglin Air Force Base, Florida. A full-size replica of the prison was constructed and live-fire training was conducted. Aircraft formations flew day and night, following the precise courses and distances that would be flown during the actual mission.

Originally planned for October, the mission had to be pushed back to November.

Because there was insufficient room to land a helicopter within the prison, it was planned to have BANANA 01, flown by Major Herbert D. Kalen and Lieutenant Colonel Herbert R. Zehnder, and carrying a 14-man assault team, BLUEBOY, crash-land inside the perimeter. The Special Forces soldiers were tasked to locate and protect the prisoners and to kill any guards that might interfere. The larger helicopters first fired on the guard towers with their miniguns and then landed their soldiers outside the prison. The A-1 Skyraiders bombed and strafed nearby foot and vehicle bridges to stop reinforcements from making their way to the prison.

Once inside the prison, it was quickly discovered that there were no American POWs there. The assault forces then withdrew. The total time from the beginning to the end of the assault was just 26 minutes. One American soldier suffered a gunshot wound to the leg. The crew chief of BANANA 01 broke an ankle when it was hit by a falling fire extinguisher during the crash landing. As expected, BANANA 01 was written off. Between 100–200 North Vietnamese soldiers were killed.

During the withdrawal from the area, North Vietnam fired more than 36 surface-to-air missiles at the aircraft. None were hit, though one Republic F-105G Wild Weasel, 62-4436, call sign FIREBIRD 05, was damaged by a near miss. This aircraft ran out of fuel just short of its tanker rendezvous and the crew bailed out over Laos. They were rescued by Super Jolly Green Giants APPLE 04 and APPLE 05, after they had been refueled by an HC-130P Combat Shadow, LIME 02.

Although meticulously planned and carried out, the mission failed because the POWs had been moved to another prison camp, closer to Hanoi (“Camp Faith”). Three days after the raid on Sơn Tây, they were again moved, this time to the infamous Hanoi Hilton. 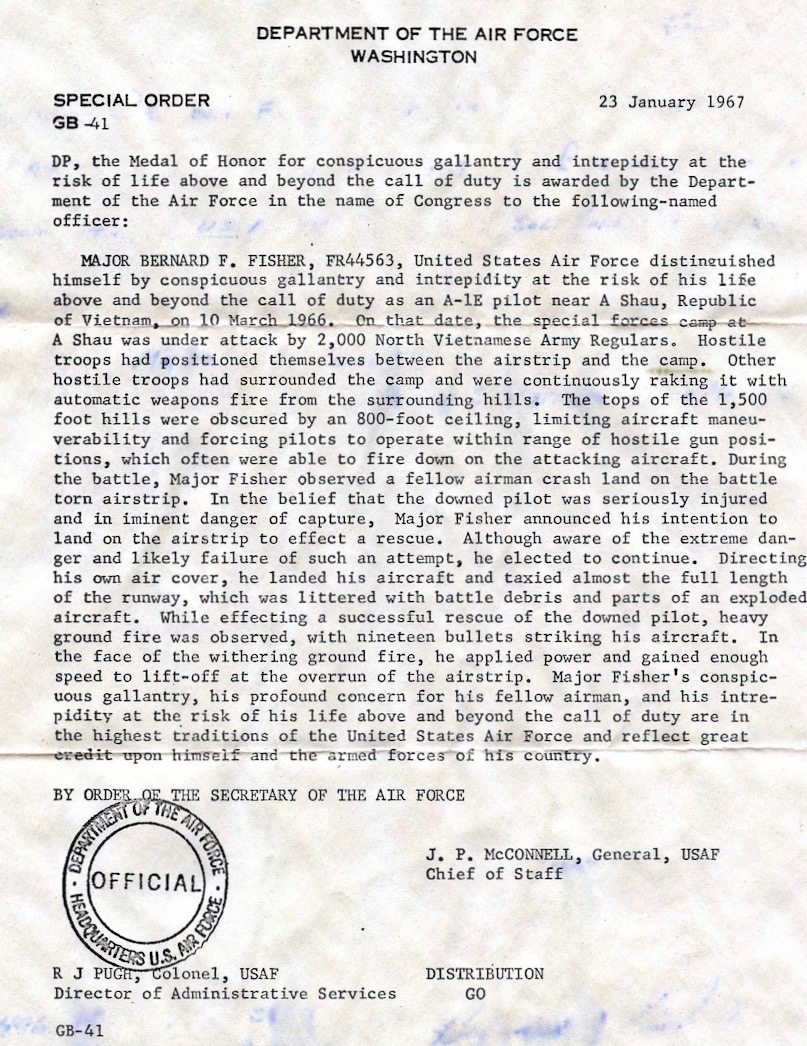 Bernie Fisher served in the United States Navy from 10 February 1945 to 16 March 1946. He was an Aviation Machinist Mate 1st Class (AMM 1c). He was discharged following the end of World War II. Fisher attended Boise Junior College, Boise, Idaho from 1947 to 1949, and at the same time, served with the Air National Guard.

Fisher transferred the University of Utah, where he was a cadet in the Air Force Reserve Officers Training Corps (ROTC). He was commissioned as a second lieutenant in the United States Air Force in 1951.

Fisher flew fighters in the Air Defense Command. He twice landed a Lockheed F-104 Starfighter following a complete engine failure. In 1965, Major Fisher volunteered for service in Vietnam, where he flew 200 combat missions. He was awarded the Silver Star for his actions during the Battle of A Shau, one day prior to the Medal of Honor action.

President Lyndon B. Johnson presented the Medal of Honor to Major Fisher at a ceremony in the White House, 19 January 1967. Fisher was the first to receive the newly-designed U.S. Air Force version of the Medal of Honor.

Colonel Fisher died 16 August 2014, at Boise, Idaho, at the age of 87 years. He was buried at the Idaho State Veterans Cemetery.

These aircraft were identified by Department of the Navy, Bureau of Aeronautics serial numbers, commonly referred to as “bureau numbers,” or “bu. no.” Once acquired by the Air Force, the two-digit fiscal year number in which the airplane was contracted was added to the bureau number, resulting in a serial number with a format similar to a standard U.S.A.F. serial number. For example, Major Fisher’s Skyraider, A-1E 52-132649, was originally U.S. Navy AD-5 Skyraider Bu. No. 132649, authorized in 1952. (The Douglas AD series was redesignated A-1 in 1962.)

The Douglas AD-5 Skyraider was  designed as a two-place, single-engine, antisubmarine warfare aircraft. A low-wing monoplane with conventional landing gear, it has folding wings for storage aboard aircraft carriers. With two pilots seated side-by-side, the AD-5’s fuselage is both wider and longer than earlier AD-series aircraft. Two ASW mission specialists were seated in the aft cabin. In 1962, the AD-5 was re-designated A-1E.

The A-1E is armed with four 20 mm M3 autocannon, with two in each outboard wing, and 200 rounds of ammunition per gun. The Skyraider can carry a combination of external fuel tanks, gun pods, bombs or rockets on 15 hardpoints. The maximum bomb load is 8,000 pounds (3,629 kilograms).

The airplane was considered salvageable. It was picked up by a Sikorsky CH-54 Tarhe and transported to Tân Sơn Nhứt Air Base near Saigon, where it was repaired and then returned to service with the 3rd Tactical Fighter Wing at Biên Hòa Air Base in November 1965.

52-132649 was next assigned to the 1st Air Commando Squadron, 14th Air Commando Wing, at Pleiku Air Base. The Skyraider was returned to the United States in 1967 and was retired from service in January 1968. It was ferried from Hurlburt Field, Florida, to the National Museum of the United States Air Force at Wright-Patterson Air Force Base, Dayton, Ohio, where it was put on display.