CITATION: The President of the United States of America, in the name of Congress, takes pleasure in presenting the Medal of Honor to Major (Field Artillery) Charles S. Kettles (ASN: 0-1938018), United States Army, for acts of gallantry and intrepidity above and beyond the call of duty while serving with the 176th Aviation Company (Airmobile) (Light), 14th Combat Aviation Battalion, Americal Division. On 15 May 1967, Major Kettles, upon learning that an airborne infantry unit had suffered casualties during an intense firefight with the enemy, immediately volunteered to lead a flight of six UH-1D helicopters to carry reinforcements to the embattled force and to evacuate wounded personnel. Enemy small arms, automatic weapons, and mortar fire raked the landing zone, inflicting heavy damage to the helicopters; however, Major Kettles refused to depart until all helicopters were loaded to capacity. He then returned to the battlefield, with full knowledge of the intense enemy fire awaiting his arrival, to bring more reinforcements, landing in the midst of enemy mortar and automatic weapons fire that seriously wounded his gunner and severely damaged his aircraft. Upon departing, Major Kettles was advised by another helicopter crew that he had fuel streaming out of his aircraft. Despite the risk posed by the leaking fuel, he nursed the damaged aircraft back to base. Later that day, the Infantry Battalion Commander requested immediate, emergency extraction of the remaining 40 troops, including four members of Major Kettles’ unit who were stranded when their helicopter was destroyed by enemy fire. With only one flyable UH-1 helicopter remaining, Major Kettles volunteered to return to the deadly landing zone for a third time, leading a flight of six evacuation helicopters, five of which were from the 161st Aviation Company. During the extraction, Major Kettles was informed by the last helicopter that all personnel were onboard, and departed the landing zone accordingly. Army gunships supporting the evacuation also departed the area. Once airborne, Major Kettles was advised that eight troops had been unable to reach the evacuation helicopters due to the intense enemy fire. With complete disregard for his own safety, Major Kettles passed the lead to another helicopter and returned to the landing zone to rescue the remaining troops. Without gunship, artillery, or tactical aircraft support, the enemy concentrated all firepower on his lone aircraft, which was immediately damaged by a mortar round that shattered both front windshields and the chin bubble and was further raked by small arms and machine gun fire. Despite the intense enemy fire, Major Kettles maintained control of the aircraft and situation, allowing time for the remaining eight soldiers to board the aircraft. In spite of the severe damage to his helicopter, Major Kettles once more skillfully guided his heavily damaged aircraft to safety. Without his courageous actions and superior flying skills, the last group of soldiers and his crew would never have made it off the battlefield. Major Kettles’ selfless acts of repeated valor and determination are in keeping with the highest traditions of military service and reflect great credit upon himself and the United States Army.

Charles Seymour Kettles was born at Ypsilanti, Michigan, 9 January 1930. He was the third of five sons of Albert Grant Kettles, an airplane pilot, and Cora Leah Stoble Kettles.

Charles Kettles was conscripted into the United States Army, 18 October 1951. He underwent basic training at Camp Breckinridge, near Morganfield, Kentucky. After graduating from Officer Candidate School, Fort Knox, Kentucky, 28 February 1953, Kettles was commissioned as a second lieutenant, Field Artillery, United States Army Reserve. He was next assigned to the Army Aviation School for flight training. Lieutenant Kettles served in Korea, Japan and Thailand.

Lieutenant Kettles was released from active duty in 1956 and returned to Ypsilanti. With his older brother, Richard, he formed Kettles Ford Sales, Inc., an automobile dealership. At the same time, he maintained his reserve commission, assigned to the 4th Battalion, 20th Field Artillery Regiment.

Kettles married Miss Anna Theresa Maida of Philadelphia on 25 August 1956. They would have six children. They divorced 21 September 1976 after twenty years.

In 1962, Kettles Ford was foreclosed, and its vehicle inventory returned to the manufacturer.

In 1963, Kettles requested to return to active duty with the U.S. Army. He was sent to Fort Wolters, Texas, in 1964, for transition training in helicopters. He then deployed to France. While in Europe, Kettles trained to fly the Bell UH-1D Iroquois, universally known as the “Huey.”

Returning from Europe in 1966, Captain Kettles assumed command of the 176th Aviation Company (Airmobile) at Fort Benning, Georgia. He was promoted to the rank of major, 27 February 1967. The unit then deployed to the Republic of Vietnam in support of the Americal Division. Kettles first tour “in country” was from February through August 1967.

On 14 May 1967, the day prior to the Medal of Honor action, Major Kettles took part in the rescue of a six-man Long Range Reconnaissance Patrol which was surrounded by enemy soldiers, and was in the target zone for an imminent B-52 “Arc Light” strike. For his actions, he was awarded the Distinguished Flying Cross. 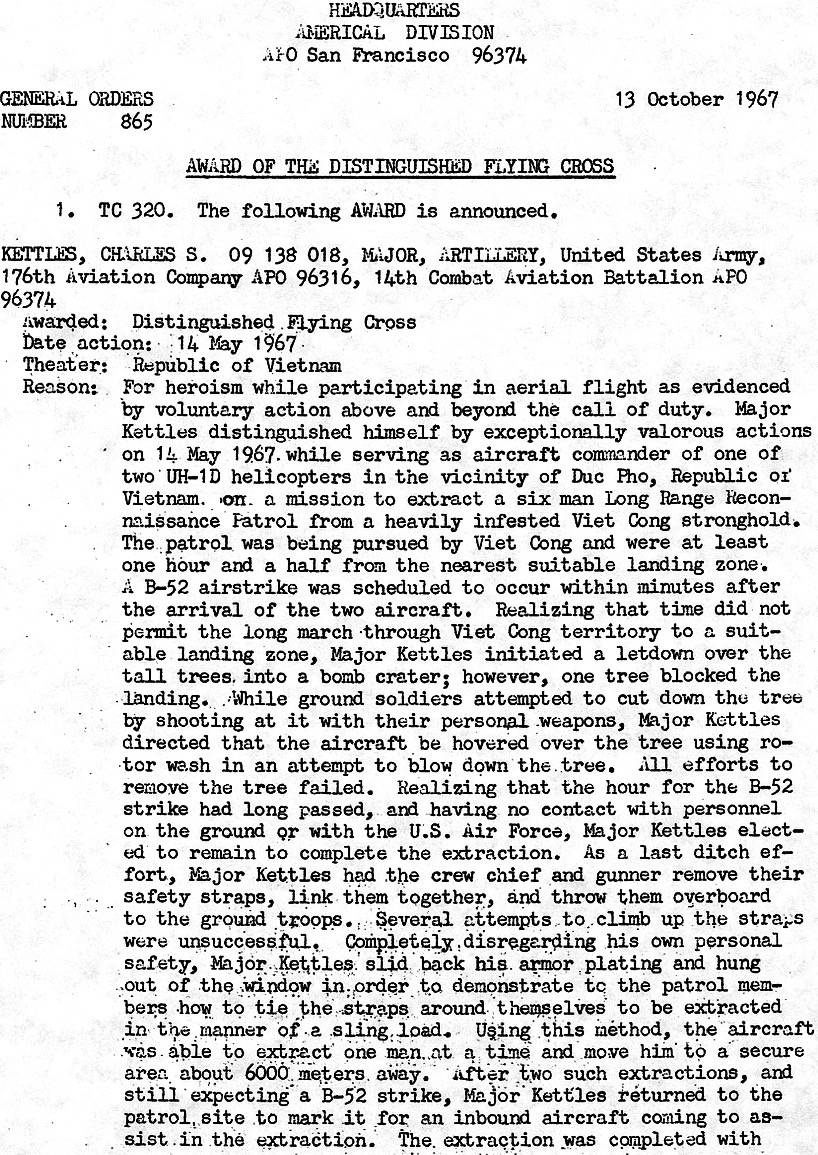 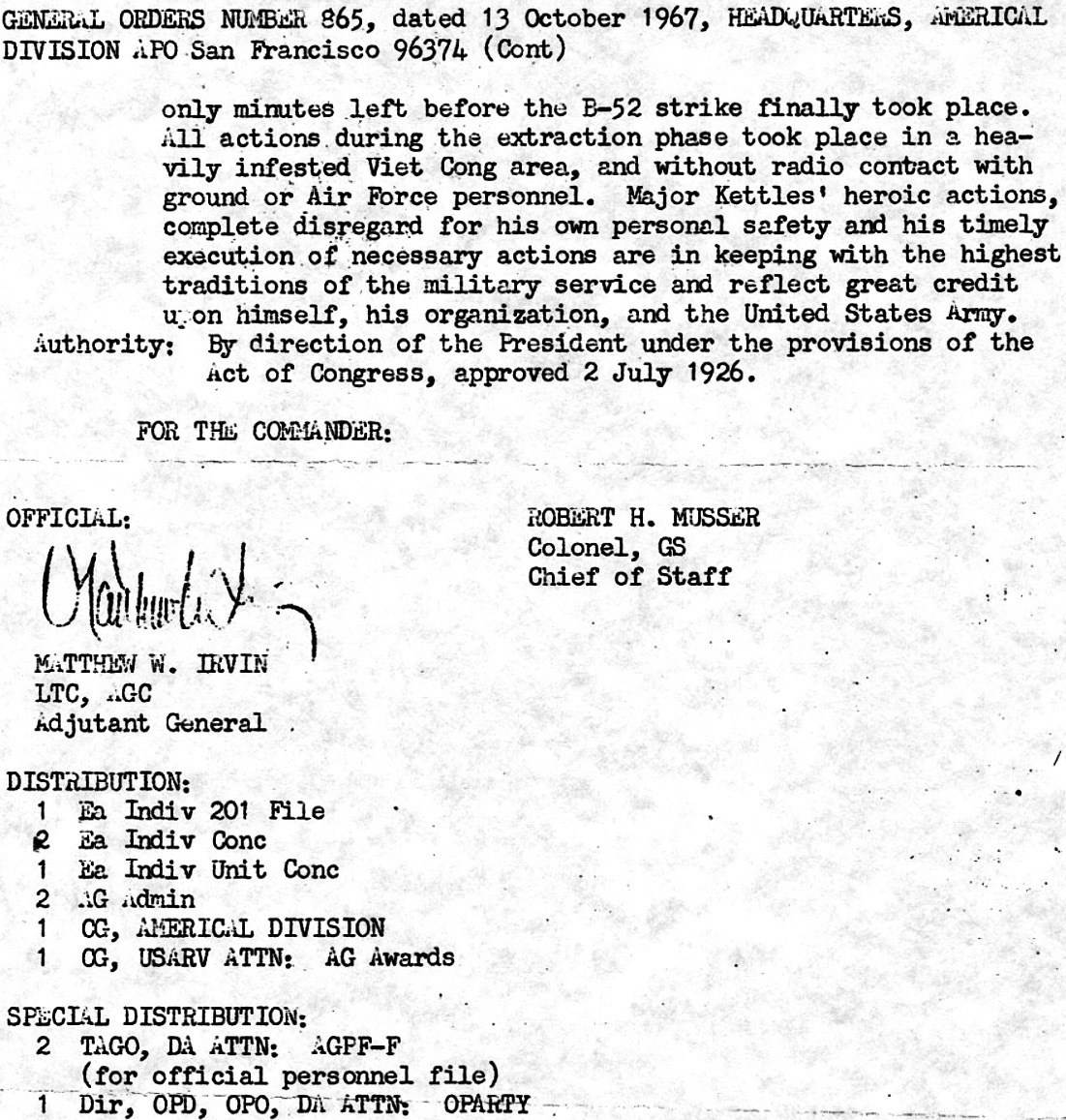 For his actions in Operation MALHEUR on 15 May 1967, Major Kettles was awarded the Distinguished Service Cross. The Medal was presented by Lieutenant General L. J. Lincoln, commanding Fourth United States Army, in a ceremony at Fort Sam Houston, San Antonio, Texas, in May 1968.

Lieutenant Colonel Kettles retired from the United States Army in 1978. In addition to the Distinguished Service Cross and Distinguished Flying Cross, he had been awarded the Legion of Merit; the Bronze Star with one oak leaf cluster (two awards); and twenty-seven Air Medals.

He completed his college education which had been interrupted when he was drafted into the Army twenty-six years earlier, earning a Bachelor of Science degree in business management from Our Lady of the Lake University in San Antonio, and a Master of Science in Industrial Technology from Eastern Michigan University. He then taught Aviation Management at E.M.U.

Charles Kettles also worked for Chrysler Pentastar Aviation until he retired in 1993.

Beginning in 2012, efforts began to upgrade Colonel Kettles’ Distinguished Service Cross to the Medal of Honor. A bill, S.2250, was passed in the first session of the 114th Congress authorizing the award, which was also approved by Secretary of Defense Ashton Carter.

In a ceremony held at The White House, 18 July 2016, the Medal of Honor was presented to Lieutenant Colonel Charles Seymour Kettles, United States Army (Retired), by Barrack Obama, 44th President of the United States of America.

Charles Seymour Kettles died in his home town of  Ypsilanti, Michigan, 21 January 2019. He was buried at the Highland Cemetery.

The Bell Helicopter Co. UH-1D Iroquois (Model 205) was an improved variant the UH-1B (Model 204). The type’s initial military designation was HU-1, and this resulted in the helicopter being universally known as the “Huey.” The UH-1D has a larger passenger cabin, longer tail boom and increased main rotor diameter.

The UH-1D was a single main rotor/tail rotor medium helicopter powered by a turboshaft engine. It could be flown by a single pilot, but was commonly flown by two pilots in military service. The helicopter had an overall length of 57 feet, 0.67 inches (17.375 meters) with rotors turning. The fuselage was 41 feet, 5 inches (12.624 meters) long. The helicopter had a height of 13 feet, 7.4 inches (4.150 meters), measured to the top of the mast. The maximum gross weight of the UH-1D was 9,500 pounds (4,309.1 kilograms).

The two blade semi-rigid, under-slung main rotor had a diameter of 48 feet, 3.2 inches (14.712 meters), and turned counter clockwise when viewed from above. (The advancing blade is on the helicopter’s right.) At 100% NR, the main rotor turned 324 r.p.m. The two blade tail rotor assembly had a diameter of 8 feet, 6 inches (2.591 meters). It was on the left side of the pylon in a pusher configuration and turned counter-clockwise as seen from the helicopter’s left. (The advancing blade is above the axis of rotation.)

Many UH-1D helicopter were upgraded to the UH-1H standard.