43-49507 (Douglas serial number 26768) was built at Oklahoma City as a C-47B-15-DK Skytrain. The C-47B differed from the C-47A in that it was powered by Pratt & Whitney Twin Wasp S3C4-G (R-1830-90) engines. These engines were equipped with two-speed superchargers for improved high-altitude performance. Following World War II, the second speed (“high blower”) was either disabled or removed. Following this modification, the airplane was redesignated C-47D.

The Douglas C-47 Skytrain is a military transport variant of the Douglas Aircraft Company DC-3 commercial airliner. It is an all-metal, twin-engine, low-wing monoplane with retractable landing gear. It was operated by a minimum flight crew of two pilots, navigator, radio operator and mechanic/load master. The airplane’s control surfaces are covered with doped-fabric. The primary differences between the civil DC-3 and military C-47 was the addition of a cargo door on the left side of the fuselage, a strengthened cargo floor, a navigator’s astrodome and provisions for glider towing.

The C-47 could carry 9,485 pounds (4,302 kilograms) of cargo, or 27 fully-equipped paratroopers. Alternatively, 24 patients on stretchers could be carried, along with two attendants.

On D-Day, The Sixth of June, 1944, a formation of C-47 Skytrains, nine airplanes abreast, 100 feet (30 meters) from wing tip to wing tip, 1,000 feet (305 meters) in trail, stretching for over 300 miles (483 kilometers), airdropped 13,348 paratroopers of the 82nd and 101st Airborne Divisions, United States Army, and another 7,900 men of the British Army 6th Airborne Division and the 1st Canadian Parachute Battalion, behind the beaches at Normandy, France.

During the Vietnam War, 53 C-47s were converted from their transport role to AC-47 Spooky gunships. These were armed with three fixed, electrically-powered General Electric  GAU-2/A .30-caliber (7.62 NATO) Gatling guns firing out the left side of the fuselage. These aircraft were highly effective at providing close air support. The three Miniguns could fire a total of 12,000 rounds per minute. 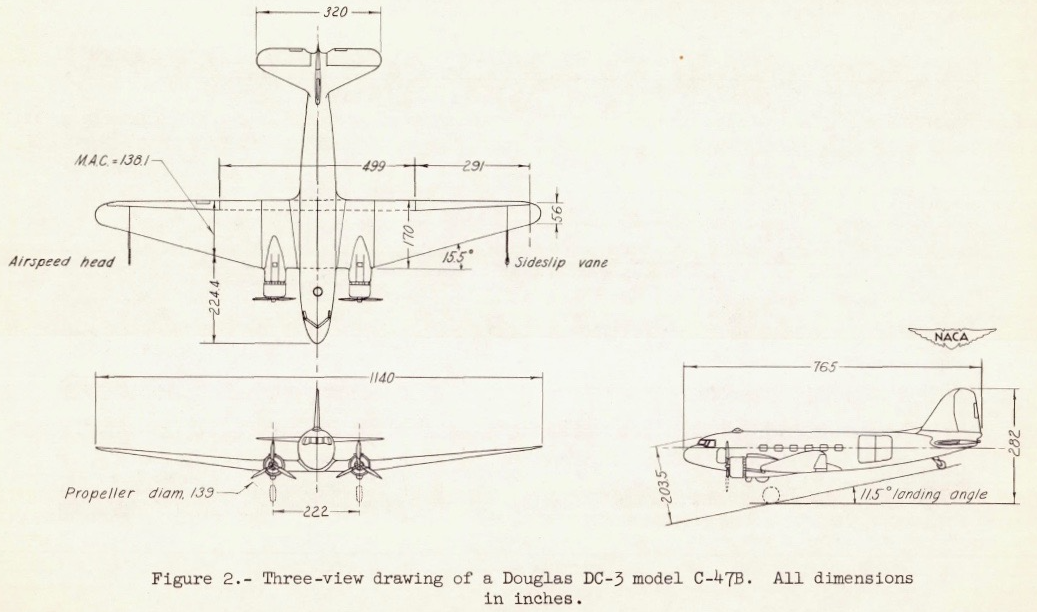