17 August 1942: Mission No. 1. The United States VIII Bomber Command made its first heavy bomber attack on Nazi-occupied Europe when eighteen Boeing B-17E Flying Fortress four-engine bombers of the 97th Bombardment Group (Heavy), based at RAF Polebrook, Northamptonshire, England, headed for the railroad marshaling yards at Rouen-Sotteville, France. This was the largest and most active railroad yard in northern France.

The group began takeoffs at 1530 hours. It was escorted by several squadrons of Royal Air Force Supermarine Spitfire fighters.

Accuracy was good. One of the aim points, the locomotive shops, was destroyed by a direct hit. The overall results were moderate.

All of the bombers returned to their base, with the first landing at 1900. Two B-17s had been damaged. American gunners claimed damage to one Luftwaffe airplane.

The raid was commanded by Brigadier General Ira C. Eaker aboard Yankee Doodle, B-17E 41-9023, leading the second flight of six B-17s. The 97th Bombardment Group Commander, Colonel Frank A. Armstrong, Jr., flew as the co-pilot of the lead ship, Butcher Shop, B-17E 41-2578, with pilot Major Paul W. Tibbets, Jr. Major Tibbets was in command of the 97th’s 340th Bombardment Squadron. (He would later command the 509th Composite Group and fly the B-29 Superfortress Enola Gay.)

The Boeing B-17E Flying Fortress was a major redesign. A new aft fuselage was used, incorporating larger vertical and horizontal stabilizers. A tail turret was added. A power-operated gun turret was added at dorsal and ventral positions.

The B-17E Flying Fortress was armed with one .30-caliber Browning M2 Aircraft Machine Gun and eight Browning AN-M2 .50-caliber machine guns. The .30 was mounted in the nose.  Power turrets mounting two .50-caliber guns, each, were located at the dorsal and ventral positions. (The first 112 B-17Es were built with a remotely-operated turret in the belly position, sighted by a periscope. A manned ball turret replaced this.) Two machine guns were in a tail turret, and one on each side at the waist.

The Boeing Model 294, designated XB-15 by the Air Corps, was an experimental airplane designed to determine if a bomber with a 5,000 mile range was possible. It was designed at the same time as the Model 299 (XB-17), which had the advantage of lessons learned by the XB-15 design team. The XB-15 was larger and more complex than the XB-17 and took longer to complete. It first flew more than two years after the prototype B-17.

Designers had planned to use an experimental 3,421.194-cubic-inch-displacement (56.063 liter) liquid-cooled, supercharged and turbosupercharged Allison V-3420 twenty-four cylinder, four-bank “double V” engine. It produced a maximum of  2,885 horsepower at 3,000 r.p.m. The engine was not available in time, however, and four air-cooled Pratt & Whitney R-1830 (Twin Wasp) engines were used instead. With one-third the horsepower, this substitution left the experimental bomber hopelessly underpowered as a combat aircraft. (The Douglas XB-19 was retrofitted with V-3420s in 1942, and re-designated XB-19A.)

The XB-15’s wings used a symmetrical airfoil and were very highly tapered (4:1 from root to tip). They had an angle of incidence of 4½° and 4½° dihedral. The total area was 2,780 square feet (258.271 square meters). A contemporary aeronautical publication wrote, “The airfoil provides constant center of pressure, minimum profile drag with flaps up and high maximum lift with flaps down.” The XB-15’s wings were adapted by Boeing for the Model 314 Clipper flying boat.

The bomber could carry a maximum of 12,000 pounds (5,443 kilograms) of bombs in its internal bomb bay, and was armed with three .30-caliber and three .50-caliber machine guns for defense .

Only one XB-15 was built. During World War II it was converted to a transport and re-designated XC-105. In 1945 35-277 was stripped and abandoned at Albrook Field, Territory of the Canal Zone, Panama.

The single Y1B-17A (Boeing Model 299F) was originally ordered as a static test article, but when that was determined to be unnecessary, it was used as an engine test aircraft. It was equipped with four 1,823.129-cubic-inch-displacement (29.875 liter) air-cooled, supercharged, Wright R-1820-51 (Cyclone G59) single-row nine-cylinder radial engines. Moss/General Electric turbo-superchargers were installed, initially on top of the wings, but were moved to the bottom of the engine nacelles.

The turbo-superchargers installed on the YB-17A greatly improved the performance of the bomber, giving it a 55 mile per hour (89 kilometer per hour) increase in speed over the supercharged YB-17s, and increasing the bomber’s service ceiling by 7,000 feet (2,132 meters). The turbo-superchargers worked so well that they were standard on all following B-17 production models.

² This record-setting flight was dramatized in the motion picture “Test Pilot,” (1938, Metro-Goldwyn-Mayer) with Clark Gable, Spencer Tracy and Myrna Loy. This movie is now 80 years old and has a melodramatic plot, but is well worth seeing for aviation history enthusiasts. 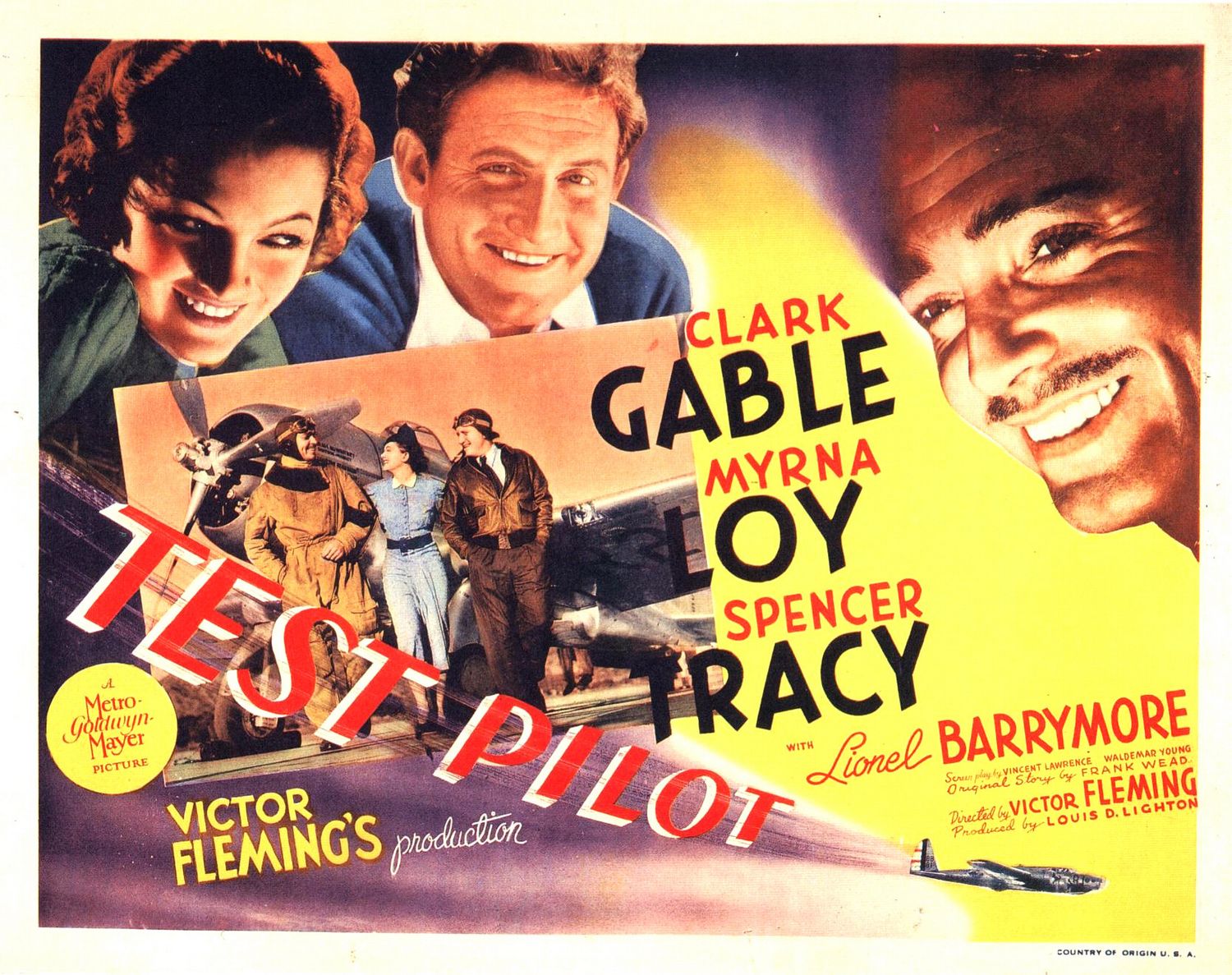 28 July 1935, At Boeing Field, Seattle, Chief Test Pilot Leslie Ralph (“Les”) Tower and Louis Waite took off on the maiden flight of the Boeing Model 299, NX13372, a prototype four-engine long range heavy bomber. For approximately one-and-a-half hours, Tower flew back and forth between Tacoma and Fort Lewis. When he landed, he said, “It handles just like a little ship—a little bigger, of course.”

The Boeing Model 299 was a four-engine bomber operated by a crew of eight. It  was designed to meet a U.S. Army Air Corps proposal for a multi-engine bomber that could carry a 2,000 pound (907 kilogram) bomb load a distance of 2,000 miles (3,219 kilometers) at a speed greater than 200 miles per hour (322 kilometers per hour). Design of the prototype began in June 1934 and construction was started 16 August 1934. The Air Corps designated it B-299, and later, XB-17. It did not carry a military serial number, being marked with civil registration NX13372.

NX13372 was destroyed when it crashed on takeoff at Wright Field, Dayton, Ohio, 30 October 1935. An Army Air Corps pilot making his first familiarization flight neglected to remove the control locks. This incident led directly to the creation of the ”check list” which is used by all aircraft crew members.

Designated XB-17 by the Army Air Corps, this airplane and the YB-17 pre-production models that followed would undergo several years of testing and improvement before entering production as the B-17 Flying Fortress, a legendary airplane of World War II. By the end of the war 12,731 B-17s had been built by Boeing, Douglas and Lockheed Vega.

Leslie Ralph Tower was born at Sisseton, South Dakota, 21 January 1903. He was the first of three children of Ralph R. Tower, a farmer who would later serve as a state senator for Montana, and Mayme Amanda Johnson Tower, a Swedish immigrant.

Les Tower attended high school at Polson, Montana, graduating in 1922. He then attended the University of Washington, where he studied engineering. He was a member of the Radio Club.

Tower enlisted in the United States Army as an aviation cadet, training at Brooks and Kelly airfields in Texas. He then served with the 2nd Bombardment Squadron at Langley Field, Virginia.

In 1925 Tower started working for Boeing as a draftsman, but soon began test flying new airplanes, which included the B-9 bomber and the Model 247 commercial airliner. He also demonstrated and delivered Boeing airplanes around the world.

Les Tower was aboard the XB-17 as an observer during the 30 October flight. He saw that the control locks had not been released and tried to reach them, but was unable. In the fire that followed the crash, Tower suffered severe burns to his face, right arm and both legs.

Leslie Ralph Tower died of his injuries 19 November 1935 at Miami Valley Hospital in Dayton. His remains were transported by train, escorted by Army airplanes, and were buried at Lakeview Cemetery, Polson, Montana.