11 June 1971: Sheila Scott O.B.E. (née Sheila Christine Hopkins) departed Nairobi, Kenya, on her third solo around-the-world flight. On this flight she used a new airplane, a twin-engine Piper PA-23-250 Aztec D which she named Mythre. It carried United Kingdom registration G-AYTO. Scott used a NASA navigation and locator communication system to constantly relay her position to a Nimbus weather satellite, and from there to a ground station.

Sheila Scott planned to not only fly around the world, but to fly from the Equator, over the North Pole, and back to the Equator again. She flew her Aztec from London, England, to Nairobi, Kenya, where she began the Equator–North Pole–Equator portion of the flight.

Scott took off from Nairobi on 11 June 1971 and headed northward to Khartoum, Sudan; Bengazi, Libya; Malta; arriving back at London on 21 June. From there she continued to Bodø, Norway; Andøya, Norway; Station Nord, Greenland; across the North Pole on 28 June; then southward to Barrow, Alaska; arriving at Anchorage, Alaska, on 3 July; San Francisco, California, to Honolulu, Hawaii, on 11 July. She recrossed the Equator heading south to Canton Island. On 23 July, Mythre arrived at Nadi, Viti Levu, Fiji, and then flew on to Noumea, New Caledonia. After a stop at Townsville, Queensland, Scott arrived at Darwin, Northern Teritory, Australia, 1 August. From there she continued to Singapore; Madras, India; Karachi, Pakistan; Bahrain; Athens, Greece; and finally completed her journey at London on 4 August. The trip took 55 days.

The Aztec D is powered by two air-cooled, fuel-injected, 541.511-cubic-inch-displacement (8.874 liter) AVCO Lycoming IO-540-C4B5 6-cylinder, horizontally-opposed, direct-drive engines. The -C4B5 has a compression ratio of 8.5:1 and a Maximum Continuous Power/Takeoff rating of 250 horsepower at 2,575 r.p.m. It weighs 374 pounds (170 kilograms). The engines drive two-bladed Hartzell constant-speed propellers with a diameter of 6 feet, 2 inches (1.880 meters).

After the around-the-world flight, Scott returned Mythre to the Piper Aircraft Company at Lock Haven, Pennsylvania, for overhaul. Following Tropical Storm Agnes in June 1972, the Piper factory was flooded to a depth of 16 feet (4.9 meters) and Scott’s airplane, along with many others and much of the tooling for aircraft manufacture, was destroyed.

This painting is available from the Guild of Aviation Artists at: 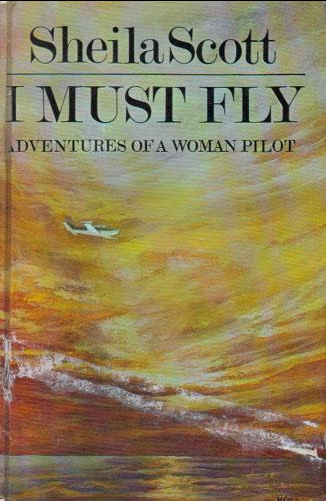