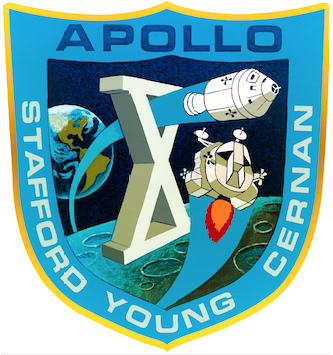 With their spacecraft crippled by an internal explosion on 13 April, the planned lunar landing mission had to be aborted. Astronauts James A. Lovell, Jr., John L. Swigert, Fred W. Haise, Jr., worked continuously with engineers at Mission Control, Houston, Texas, to overcome a series of crises that threatened their lives.

17 April 1970: Because of the unusual configuration of the Apollo 13 Command Module, Service Module and Lunar Module “stack” during the coast from the Moon back to Earth, an additional, unplanned, Mid-Course Correction burn, MCC-7, had to be carried out. The damage to the Service Module prevented the use of its 21,900 pounds thrust (97.42 kilonewtons) Aerojet General Service Propulsion System engine. It was necessary to use the LM’s Bell Aerosystems Ascent Propulsion System engine. The APS engine produced 3,500 pounds of thrust (15.57 kilonewtons). The maneuver had to be carried out manually by the astronauts from the LM’s cockpit.

Mission Commander Lovell visually aligned the spacecraft with the LM’s Reaction Control System thrusters, by sighting the Earth in his window of the LM. Once aligned, LM pilot Fred Haise conducted the burn, which was timed by CM pilot Jack Swigert.

MCC-7 was performed at EI-5 hours (137:39 GET). The same manual piloting technique used for MCC-5 was used for control during MCC-7. This was manual crew pitch and roll control with the TTCA and automatic yaw control by the AGS. MCC-7 was performed with LM RCS using the +X translation push button. It steepened the flight path angle at EI to -6.49 degrees. After MCC-7, the crew maneuvered the spacecraft to the SM separation attitude. The CM re-entry RCS system was activated and a firing test of the thrusters was successful.

The Omega Speedmaster Professional Chronograph is a manual-winding analog wrist watch produced by Omega, a luxury brand of Société Suisse pour l’Industrie Horlogère, (SSIH) and now a part of the SWATCH Group. The case is made of stainless steel and has a diameter of 48 millimeters (1.89 inches). The Speedmaster Professional, which is also known as the “Moon Watch,” or “Speedy” to watch collectors, features a stop watch function and three sub dials for recording hours, minutes and seconds. The chronograph has a black dial with tritium-painted hands and hour marks. The bezel has a tachymeter for calculating speed based on time. When fully wound, the Speedmaster can run for up to 48 hours. The chronograph is water resistant to a depth of 50 meters (164 feet).

The Speedmaster’s crystal is not glass, but “hesalite,” a clear, scratch-resistant plastic. There had been concern that if a crystal broke during a space flight, glass fragments could be scattered throughout the weightless environment of the spacecraft, presenting a danger to the astronauts.

NASA provided Omega Speedmaster Professional Chronographs to Gemini and Apollo Program astronauts. Each watch was engraved with NASA’s two-digit serial number, and could be equipped with an adjustable length Velcro strap which allowed the watch to be worn on the outside of the space suit. NASA also assigned an equipment part number.

John Young had been a Navy test pilot before being assigned to NASA as an astronaut. He was the pilot for Gemini 3; backup pilot, Gemini 6A; commander, Gemini 10; command module pilot for Apollo 10; backup commander, Apollo 13; and commander, Apollo 16. He retired from the U.S. Navy in 1976 after 25 years of service. He would go on to command the first space shuttle flight, Columbia (STS-1) and then STS-9. He was scheduled to command Atlantis (STS-61-J). John Young retired from NASA in 2004, as one of the world’s most experienced astronauts.

The Saturn S-II second stage was built by North American Aviation at Seal Beach, California. It was 81 feet, 7 inches (24.87 meters) tall and had the same diameter as the first stage. The second stage weighed 80,000 pounds (36,000 kilograms) empty and 1,060,000 pounds loaded. The propellant for the S-II was liquid hydrogen and liquid oxygen. The stage was powered by five Rocketdyne J-2 engines, also built at Canoga Park. Each engine produced 232,250 pounds of thrust, and combined, 1,161,250 pounds of thrust.

The Saturn V third stage was designated Saturn S-IVB. It was built by McDonnell Douglas Astronautics Company at Huntington Beach, California. The S-IVB was 58 feet, 7 inches (17.86 meters) tall with a diameter of 21 feet, 8 inches (6.604 meters). It had a dry weight of 23,000 pounds (10,000 kilograms) and fully fueled weighed 262,000 pounds. The third stage had one J-2 engine and also used liquid hydrogen and liquid oxygen for propellant. The S-IVB wou place the Command and Service Module into Low Earth Orbit, then, when all was ready, the J-2 would be restarted for the Trans Lunar Injection.