The airplane races were held annually from 1909 until 1913. In those years, the race had been one twice by France, once by the United Kingdom and twice by the United States. Like the Coupe d’Aviation Maritime Jacques Schneider (the Schneider Cup) for seaplanes, the nation which won the race three times consecutively would be permanently awarded the trophy. Because of the World War, no races were held 1914–1919.

It had been anticipated that this year’s race for the Gordon-Bennett Aviation Trophy would have been a much better contest than any of the five previous competitions. Great Britain and the United States had challenged France, and the teams of each of the three countries comprised very fast machines. But disappointment followed on disappointment, and in the end only one competitor—Sadi Lacointe, on a French Nieuport—completed the full course of 300 kiloms. without trouble, and he thereby won the trophy for France for the third time.

During the early morning of Tuesday a thick mist hung over the ground, and it was not until 1.36 p.m. that the first competitor got away, this being Kirsch on one of the French Nieuports. He was followed by de Romanet on a Spad, and the third member of the French team—the favourite—Sadi Lecointe. The American team—Rinehardt on the Dayton-Wright and Major Schroeder on the Army machine—followed a few minutes after, and then there was a long wait before Raynham, on the Martinsyde “Semiquaver,” the only British representative, got away. Kirsch did the first 100 kiloms in 21 mins. 29 secs., while de Romanet took 22 mins. 52-1/5 secs., but both had to come down soon after they completed the second lap, and Kirsch retired. The Americans did not survive long, Rinehardt having to come down after a quarter of an hour, having difficulty with his steering, while Schroeder was put out of the contest by engine trouble at the end of the first round.

Raynham was unable to complete one lap, apparently being in trouble with the engine of his machine.

The French team had been chosen in an eliminating trial on Sunday, when the three pilots mentioned above were selected. Barault, on a Borel-Hispano, would probably have secured the third place if he had only flown the course as it was arranged.

The American team was reduced by one owing to the accident to Rholfs on the Curtiss. On landing at Villacoublay the chassis collapsed, and the pilot was injured, but not very seriously.

The 1920 air race, held on Tuesday, 28 September, over a course of 300 kilometers (186.4 miles) at Villecoublay-La Marmogne, France. It was won by Nieuport-Delâge’s chief test pilot, Joseph Sadi-Lecointe, flying a Nieuport-Delâge Ni-D 29V. As France had previously won the 1912 and 1913 races, the Gordon Bennett Aviation Trophy was permanently awarded to the Aero Club of France and retired.

During the race, Sadi-Lecointe set a a Fédération Aéronautique Internationale (FAI) World Record for Speed Over 200 Kilometers 274.60 kilometers per hour (170.63 miles per hour). The FAI official time for the distance was 43 minutes, 42-3/5 seconds. (FAI Record File Number 15494)

As regards the French Spad flown by Bernard de Romanet, this had the standard Spad fuselage of monocoque construction, but an alteration in the wing arrangement was noticeable. Instead of carrying the top plane on centre section struts from the body, the G.B. Spad had its top plane attached direct to the fuselage. Judging by its performance, this innovation did not improve the speed, and the machine was obviously slower than Lecointe’s Nieuport. In the first place, the maximum cross section of the body is much greater than the Nieuport, and the large nose radiator probably does not make matters better, although one would imagine that the two Lamlin radiators fitted to the Nieuport offer quite a lot of resistance. However, these radiators are now very extensively fitted on French machines, so perhaps their resistance is less than one would be inclined to expect.

Joseph Sadi-Lecointe learned to fly in 1910. The Aero Club de France awarded him its license number 431 on 10 February 1910.

He joined the Service Aéronautique (the original form of the French Air Force) as a mechanic in October 1912, and was designated pilote militaire nº375, 20 September 1913. He served as a pilot during World War I, flying the Blériot XI-2, Morane LA and Nieuprt X, then in December 1915 became a flight instructor at l’Ecole de Pilotage d’Avord. Sadi-Lacointe was promoted from the enlisted ranks to sous-lieutenant, 17 September 1917, and was assigned as a test pilot at Blériot–Société Pour L’Aviation et ses Dérivés, where he worked on the development of the famous SPAD S.XIII C.1 fighter.

After the War, he was a test pilot for Nieuport-Delâge, and participated in numerous races and set a series of speed and altitude records with the company’s airplanes.

Sadi-Lecointe returned to military service in 1925 and participated in the Second Moroccan War. Then in 1927, he returned to his position as chief test pilot for Nieuport-Delâge. From 1936 to 1940, he served as Inspector General of Aviation for the French Air Ministry. With the outbreak of World War II in 1939, Lieutenant Colonel Sadi-Lecointe was again recalled to military service as Inspector of Flying Schools.

With the Fall of France, Sadi-Lacointe joined La Résistance française, and operated with the group, Rafale Andromède. He was captured and tortured by the Gestapo at Paris, and died as a result, 15 July 1944. 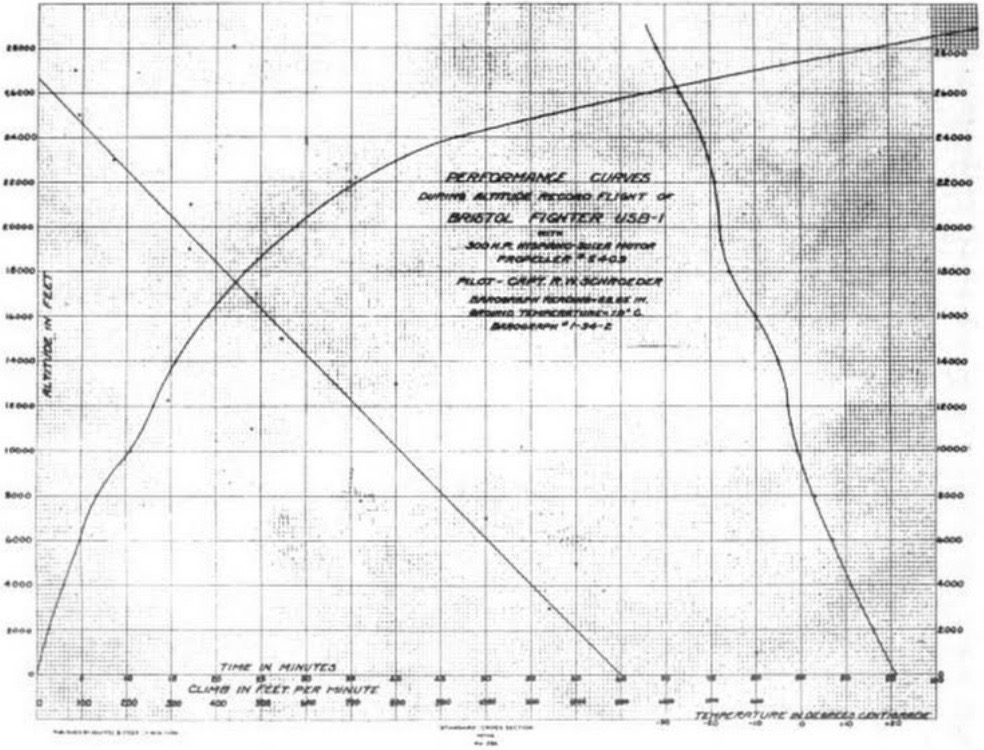 There are differing accounts of what occurred during the flight. One report is that the L USA C.II created the very first contrail as it flew at altitudes and temperatures never before reached. Also, there are differences in explanations of some type of problem with Major Schroeder’s oxygen supply. A valve may have frozen, the regulator did not operate correctly, or one of his tanks was empty. Another source says that he ran out of fuel. But he apparently suffered hypoxia and began to lose consciousness. He may have lost control, or intentionally dived for lower altitude. The airplane dived nearly 30,000 feet (9,144 meters) before Schroeder pulled out and safely landed. He was in immediate need of medical attention, however.

Recording instruments indicated that he had been exposed to a temperature of -67 °F. (-55 °C.). His goggles had iced over, and when he raised them, his eyes were injured by the severe cold.

The Fédération Aéronautique Internationale (FAI) delegated responsibility for certifying the record to the Aero Club of America, whose representatives apparently felt that procedures for setting the record had not been correctly followed, and declined to accept the altitude record.

The National Bureau of Standards next evaluated the data and credited Rudolph Schroeder with having reached 33,180 feet (10,113 meters). Regardless, the current official record altitude, according to FAI, remains 10,093 meters (33,114 feet).

The Packard Lepère L USA C.II was a single-engine, two-place biplane fighter which was designed by the French aeronautical engineer, Capitaine Georges Lepère, who had previously designed the Section Technique de l’Aeronautique Dorand AR.1 reconnaissance airplane for France’s military air service. The new airplane was built in the United States by the Packard Motor Car Company of Detroit, Michigan. It was a two-place fighter, or chasseur, light bomber, and observation aircraft, and was armed with four machine guns.

The wings were also of wooden construction, with two spruce spars and spruce ribs. Three layers of wood veneer covered the upper surfaces.

The engine coolant radiator was positioned horizontally in the center section of the airplane’s upper wing. Water flowed through the radiator at a rate of 80 gallons (303 liters) per minute.

The only Packard Lepère L USA C.II in existence, serial number A.S. 42133, is in the collection of the National Museum of the United States Air Force, Wright-Patterson Air Force Base, Ohio.