17–19 June 1941: Jacqueline (“Jackie”) Cochran was the first woman to fly a bomber across the Atlantic Ocean when she ferried a Lockheed Hudson from Canada to Scotland. The airplane was a twin-engine Lockheed Model 414 Hudson Mk.V (LR), Royal Air Force identification AM790 (Lockheed serial number 414-2872).

For this ferry flight, Captain Edgar Grafton Carlisle, Jr.,² was assigned as her navigator. The Hudson also carried a radio operator, today only remembered as Coates. Royal Canadian Air Force authorities felt that Miss Cochran was not physically strong enough to operate the Hudson’s hand brakes. The arrangement between her and the R.C.A.F. was that she would be allowed to fly the bomber as First Officer, but that Captain Carlisle would make all takeoffs and landings.³ 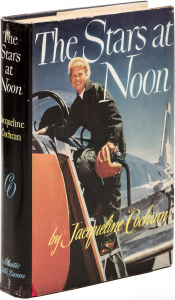 The Hudson was designed to carry four 250 pound (113 kologram) or six 100 pound (45 kilogram) bombs. It was armed with two forward-firing .303 Browning Machine Gun Mk.II mounted in the nose and operated by the pilot, with another two .303s on flexible mounts at the waist position, and 2 additional Mk.IIs in a power-operated Bolton Paul dorsal turret. Eight rockets could be carried under the wings.

He entered the United States Army as an aviation cadet at Kelly Field, Bexar, Texas, earning his reserve officer’s commission and aviator’s wings in 1930. He served as a lieutenant in the 28th Division Aviation Unit, Pennsylvania National Guard and commanded the 103rd Photo Section.

Carlisle entered the Royal Air Force Ferry Command in September 1940. To do so, he was required to resign his reserve commission in the United States Army. In the King’s New Year’s Honors List, 1 January 1942, Captain Edgar Grafton Carlisle, R.A.F.F.C., was invested an Officer of the Most Excellent Order of the British Empire (Honorary). The insignia of this honor was presented at Government House, 3 February 1942, by Lord Athlone, Governor General of the Dominion of Canada.

Following the War, Carlisle worked in the banking industry. He also taught Aerial Navigation at the University of Vermont.

³ Jackie wrote: “The moment the plane became airborne Carlisle, having complied with instructions as to take-off, turned the single set of controls over to me.” —The Stars at Noon, by Jacqueline Cochran, Little, Brown and Company, Boston and Toronto, 1954 Chapter VI at Page 102

⁴ Bo Rizzo was  an Allied airfield in Sicily.