2 November 1922: The first scheduled airline passenger to fly aboard the Queensland and Northern Territory Aerial Services Limited was Alexander Kennedy. The pilot was Hudson Fysh (later, Sir Hudson Fysh, KBE, DFC). The engineer was W. Arthur Baird. The trip was from Longreach to Cloncurry, Queensland, Australia.

#0000ff;">An 84-year-old outback pioneer named Alexander Kennedy became the first Qantas passenger on a scheduled flight. He had agreed to subscribe some cash and join the provisional board provided he got ticket No.1. His flight, on 2 November 1922, was on the Longreach-Winton-McKinlay-Cloncurry section of the inaugural mail service from Charleville to Cloncurry.

H#0000ff;">udson Fysh recalled the event in his book, #0000ff;">Qantas Rising, “The Armstrong Whitworth was wheeled out of the hangar at the first streak of dawn, many willing hands helping to push her to the then uneven surface of the stony ‘tarmac’. The 160hp Beardmore engine sprang to life after Baird and his helpers had given the propeller a few turns, and flickering flames jetted from the exhaust stubs.

#0000ff;">“I climbed into the cockpit and ran the engine up. Yes, she gave her full revs and all was in readiness. Kennedy climbed in, brushing off assistance as he groped for the foot-niches in the side of the fuselage, and then he was settled with safety belt adjusted. Baird was aboard too. The chocks were pulled away from the wheels, and out we taxied to the far corner of the aerodrome.

#0000ff;">“The wind was light and fitful, coming from the north-east in warm puffs. It was going to be a scorching western day. When I opened up the throttle with a roar we gathered motion, careering towards the far fence, but we did not seem to be getting the usual lift, the revs were down a shade, and the old AW refused to come unstuck. I shut off and taxied back for another try.

#0000ff;">“After three attempts with the same result I taxied back to the hangar again and running up the engine found that we were 50 revs down, just enough to make the difference. The other machine, old G-AUDE, which the day before had opened the service with McGinness, was hastily got out, our load transferred, and we were out for another try.

#0000ff;">“No doubt about it this time as we rose in the morning air and headed over the still sleeping town for Winton, our first stop, 35 minutes late on our departure time.” —Qantas 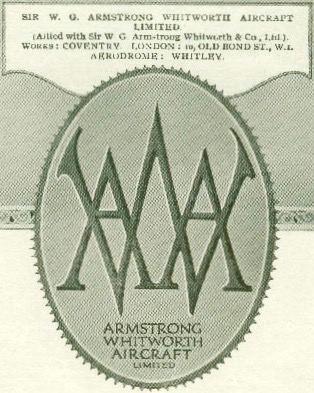 Qantas’ Armstrong Whitworth F.K.8, G-AUDE, c/n 69, was formerly Royal Air Force F4231. The airplane had been purchased as surplus equipment by Simpson, Tregilles Aircraft and Transport, Ltd., Perth, Western Australia, and was first registered 28 June 1921. It was sold to Quantas in 5 September 1922. The airplane was damaged beyond economical repair in a forced landing near Blackall, Queensland, 13 September 1923. The pilot was not injured. The airplane was dismantled and later burned. 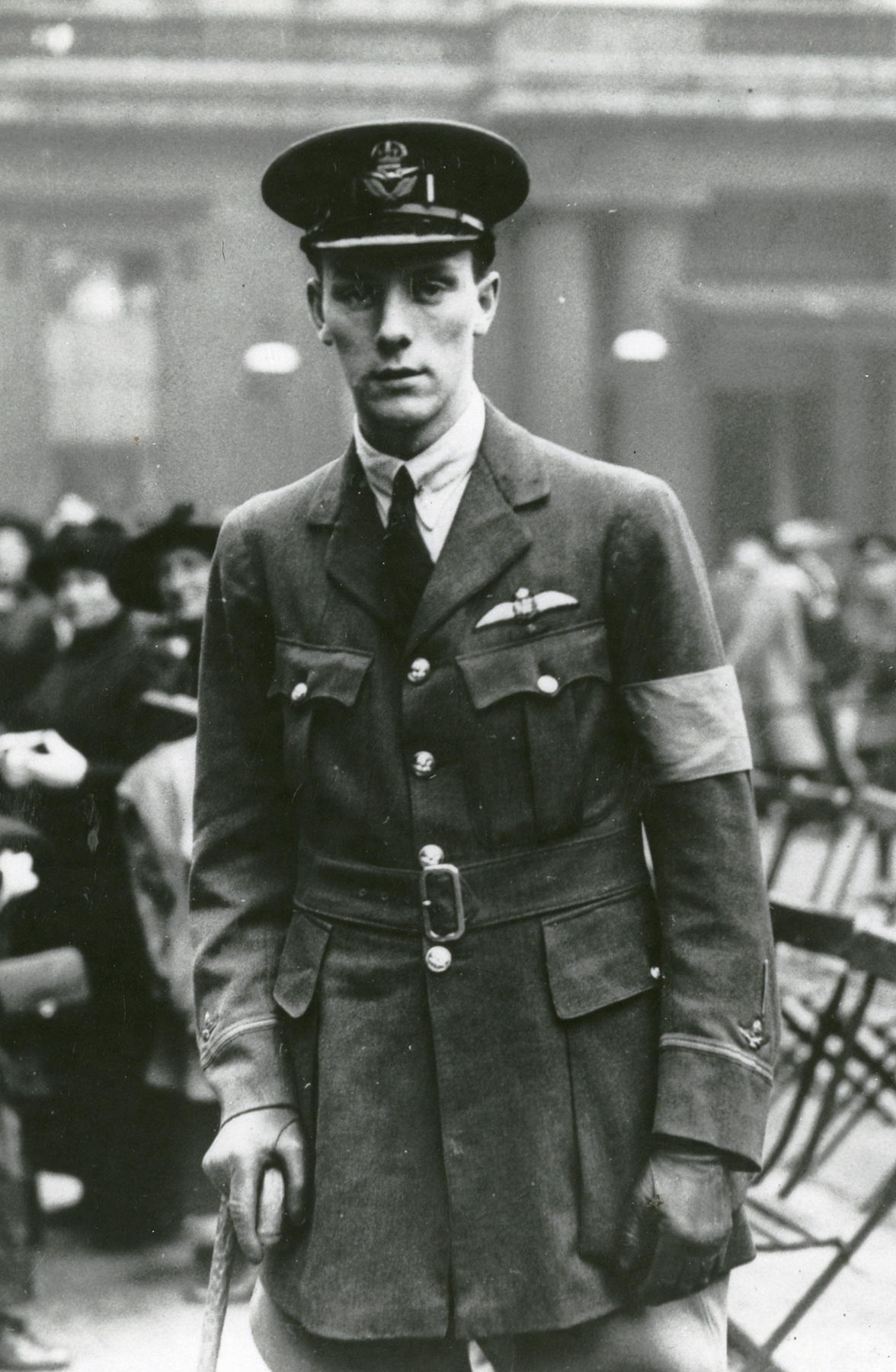 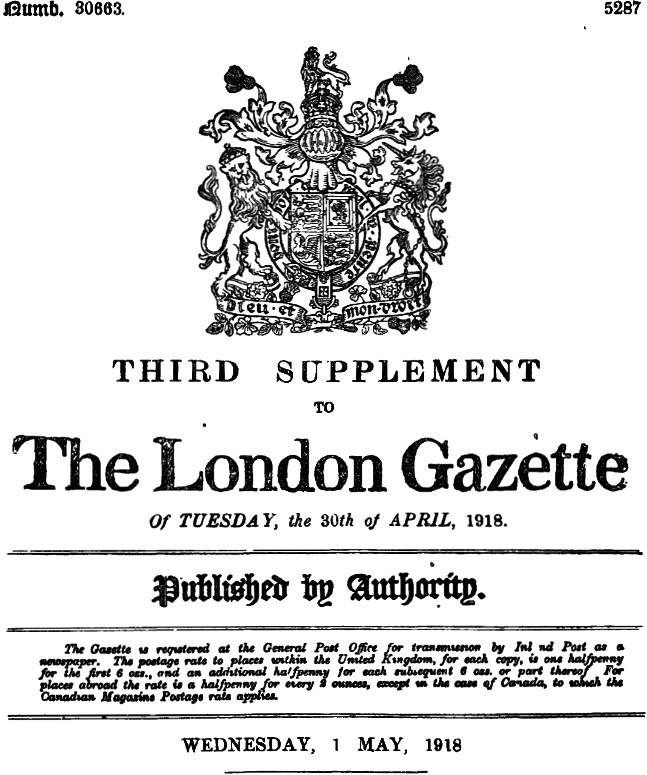 His Majesty the KING has been graciously pleased to award the Victoria Cross to the undermentioned Officers of the Royal Air Force, for services displaying outstanding bravery:—

Whilst flying with his observer (Lt. A. W. Hammond, M.C.), attacking hostile formations by bombs and machine-gun fire, he was assailed at a height of 5,000 feet by eight enemy triplanes, which dived at him from all directions, firing from the r front guns. By skilful [sic] maneuvering he enabled his observer to fire bursts at each machine in turn, shooting three of them down out of control. By this time Lt McLeod had received five wounds, and whilst continuing the engagement a bullet penetrated his petrol tank and set the machine on fire.

He then climbed out on to the left bottom plane, controlling his machine from the side of the fuselage, and by side-slipping steeply kept the flames to one side, thus enabling the observer to continue firing until the ground was reached.

The observer had been wounded six times when the machine crashed in “No Man’s Land,” and 2nd Lt McLeod, notwithstanding his own wounds, dragged him away from the burning wreckage at great personal risk from heavy machine-gun fire from the enemy’s lines. This very gallant pilot was again wounded by a bomb whilst engaged in this act of rescue, but he persevered until he had placed Lt. Hammond in comparative safety, before falling himself from exhaustion and loss of blood.

Alan Arnett McCleod was born 20 April 1899 in the village of Stonewall, Selkirk, Manitoba, Dominion of Canada. He was the first of two children of Alexander Neil McLeod, M.D., a physician, and Margaret Lillian Arnett McLeod.

After previously being turned away due to his age, Alan McLeod joined the Royal Flying Corps Canada (R.F.C.C.) 20 April 1917—his 18th birthday. He was sent to the University of Toronto for military training, then to Long Branch and Camp Borden for flight training. He was commissioned a Temporary 2nd Lieutenant (on probation), 19 August 1917.

On 20 August 1917, 2nd Lieutenant McLeod boarded the Canadian Pacific passenger liner S.S. Metagama and sailed to Bantry Bay, Ireland. For the next four months McLeod continued to train as a pilot in the Royal Air Force. He then joined No. 2 Squadron on the Western Front.

Following the action of 27 March 1918, Lieutenant McLeod spent a long period of time recovering from his wounds. It was decided to send him home to Canada. On 20 September 1918, he sailed from Southhampton aboard the Cunard liner R.M S. Aquitania. The ship arrived at the Port of New York, 27 September. Lieutenant McLeod then traveled to his home in Stonewall.

On 29 October 1918, Lieutenant McLeod was admitted to Winnipeg General Hospital in Winnipeg, Manitoba, diagnosed with the Spanish Flu, then a worldwide epidemic.

The F.K.8 was armed with two machine guns, and carried a wireless apparatus.