Reginald Joseph Mitchell born 20 May 1895 at Butt Lane, a suburb of Kidsgrove, Newcastle-under-Lyme, Staffordshire, England. He was the first of three sons of Herbert Mitchell, a school teacher, and Eliza Jane Brain Mitchell, whom some sources also describe as a teacher.

Mitchell attended  the Higher Elementary School on Queensbury Road, which provided a “semi-technical and more advanced education” in Normacot, and then Hanley High School, Stoke-on-Trent, leaving at the age of 16. He found work as a Premium Apprentice at the Kerr Stuart & Co., Ltd., locomotive engineering works in Fenton, where he was employed in the drafting room. Mitchell attended night school, studying mathematics, mechanics and technical drawing.

In 1917 Mitchell was employed as assistant to Hubert Scott-Paine, owner of the  Supermarine Aviation Works, Ltd., at Southampton, Hampshire. (Scott-Paine is known for his hard-chine motor torpedo boat designs.) Supermarine concentrated on building flying boats and amphibians.

Mitchell was promoted to Chief Designer at Supermarine in 1919, and Chief Engineer, 1920. Mitchell’s first complete airplane design was the Supermarine Commercial Amphibian of 1920.

Supermarine had been involved in the Coupe d’Aviation Maritime Jacques Schneider (the Schneider Trophy races) since 1919, when the company entered its Sea Lion biplane flying boat. The Sea Lion II amphibian won the race at Naples, Italy, in 1922.

For the 1925 Schneider race, Mitchell—called “Mitch” by officers of the High-Speed Flight—designed a new monoplane seaplane, the Supermarine S.4, G-EBLP, which was powered by a liquid-cooled Napier Lion VII “broad arrow” W-12 engine. The S.4 was damaged prior to the race, which was won by Jimmy Doolittle with the Curtiss R3C-2 racer.

During this period, Mitchell also designed the Supermarine Southampton biplane flying boat for the R.A.F. He was named Technical Director in 1927.

For the 1927 race, Mitchell designed the Supermarine S.5., which featured a monocoque duralumin fuselage. Three S.5s were built, N219, N220 and N221. Flown by officers of the Royal Air Force High-Speed Flight, the S.5s took first and second place.

Two Supermarine S.6 seaplanes, N247 and N248, were built for the 1929 Schneider race held at Calshot, not far from the Supermarine Works. These airplanes were powered by the new Rolls-Royce R liquid-cooled V-12.

For his work on the Supermarine racers, His Majesty George V, King of Great Britain, Ireland and the British Dominions Beyond the Seas, Emperor of India, appointed Reginald Joseph Mitchell a Commander of the Most Excellent Order of the British Empire (C.B.E.). 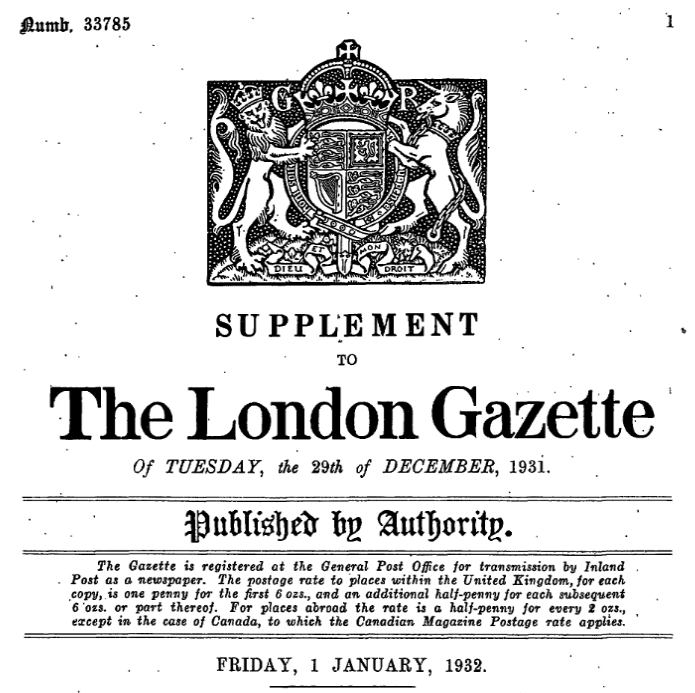 To be Commanders of the Civil Division of the said Most Excellent Order :

In August 1933, Mitchell underwent a routine medical examination, which resulted in a diagnosis of rectal cancer. Treatment options were very limited in the 1930s. He underwent a major surgical procedure which included a permanent colostomy. It can be assumed that Mitchell suffered from illness, significant pain and fatigue, but he continued working.

R.J. Mitchell decided that if he learned to fly, he would better understand the airplanes he was designing. He began flight lessons in December 1933, just a few months after the cancer surgery. He was awarded his pilot’s license in July 1934.

During this period, Mitchell worked on the single engine Supermarine Walrus and twin engine Scapa and Stranraer flying boats. The Walrus first flew 21 June 1933, with deliveries to the Royal Australian Air Force in 1935, and to the Royal Air Force in 1936. The Walrus was used extensively in air-sea rescue operations during World War II, saving more than 1,000 airmen.

In 1936, Mitchell began working on the Type 316 four-engine heavy bomber. Two prototypes were ordered but not completed. They were lost when the Supermarine factory was bombed in 1940.

In October 1936, Mitchell won a landing competition award from the Hampshire Aero Club. His trophy is now in the collection of the Solent Sky Museum.

R.J. Mitchell is, without question, best known as the designer of the Vickers-Supermarine Type 300, a private venture, built to meet an Air Ministry requirement for a new single-place, single-engine interceptor for the Royal Air Force. The prototype, K5054, flown by Vickers Aviation Ltd.’s Chief Test Pilot, Captain Joseph (“Mutt”) Summers, made its first flight at 4:35 p.m., Thursday afternoon, 5 March 1936. Landing after only 8 minutes, Summers is supposed to have said, “Don’t change a thing!”

The Air Ministry ordered the Type 300 into production as the Spitfire Mk.I before K5054’s first flight, with an initial order for 310 airplanes. The first production fighter was delivered to the Royal Air Force 4 August 1938. Between 1938 and 1948, 20,351 Spitfires were built in 24 variants.

The Spitfire became a legendary fighter during the Battle of Britain. It is a prime example of the saying that “if an airplane looks good, it will fly good.” And the Spitfire is a beautiful airplane. It was well armed, fast and maneuverable, and performed well at high altitudes. Reportedly, Luftwaffe pilots felt that there was greater dignity in having been shot down by a Spitfire than by a Hawker Hurricane, or Bolton Paul Defiant. The BBC reported, “It is a plane that came to symbolise British spirit and freedom from aggression. A bird of paradise, and it is still recognised in every country throughout the world.”

Cancer recurred in 1936. Mitchell was hospitalized in February 1937. This time he stopped working, though he would often go to the airfield to watch his Spitfire being tested. He travelled to Vienna, Austria for medical treatment in April, but returned home in May.

Reginald Joseph Mitchell, C.B.E., F.R.Ae.S., died at his home on 11 June 1937. His ashes were interred at the South Stoneham Cemetery, Hampshire, England.

In 1942, a popular film, “The First of the Few”, dramatized Mitchell’s life. The movie was produced, directed and starred Leslie Howard as Mitchell, and David Niven as a composite pilot character. It was released in the United States under the title, “Spitfire,” 12 June 1943, six years after the death of Mitchell, and less than two weeks after Leslie Howard was killed when BOAC Flight 777 was shot down by Luftwaffe fighters over the Bay of Biscay.

¹ Gordon Mitchell served aboard air-sea rescue launches in the Royal Air Force Volunteer Reserve, 1942–1944. (Many of these had been designed by Hubert Scott-Paine.) He was commissioned as a flying officer in September 1944 and served as a meteorological officer until 1947. Dr. Gordon Mitchell, Ph.D. worked at the University of Reading, National Institute for Research in Dairying, from 1952 until 1985. Dr. Mitchell died 24 November 2009.

The Vickers-Supermarine Type 300 was a private venture, built to meet an Air Ministry requirement ¹ for a new single-place, single-engine interceptor for the Royal Air Force. The airplane was designed by a team led by Reginald Joseph Mitchell, C.B.E., F.R.Ae.S., and was built at the Supermarine Aviation Works, Southampton, Hampshire, England.

R.J. Mitchell was famous for his line of Schneider Trophy-winning and world record-setting Supermarine racers of the late 1920s and early 1930s, the Supermarine S.4, S.5, S.6 and S.6B.² Mitchell was appointed Commander of the Most Excellent Order of the British Empire  (Civil Division) (CBE) in His Majesty’s New Year’s Honours, 2 January 1932, for “services in connection with the Schneider Trophy Contest.”

Interestingly, Rolls-Royce discovered that using exhaust stacks to direct the flow of gases rearward provided an additional 70 pounds of thrust, an increase of 7% over that provided by the propeller alone. Later testing of K5054 with “fish tail” exhaust stacks increased its top speed to about 360 miles per hour (579 kilometers per hour).

A report summarizing the flight testing of K5054 stated, “The aeroplane is simple and easy to fly and has no vices.” Visibility was good, the cockpit was comfortable, and it was a stable gun platform.

On 22 March 1937, K5054’s engine lost oil pressure and the pilot made a belly landing on Marlesham Heath. The Spitfire was damaged, but it was repaired and returned to service.

The prototype Spitfire stalled on landing at RAE Farnborough, 4 September 1939. After several bounces on the runway, it nosed over. The pilot, Flight Lieutenant Gilbert Stanbridge (“Spinner”) White, was severely injured. He died 9 September.

K5054 was disassembled and scrapped.

The Air Ministry ordered the Spitfire Mk.I into production before K5054’s first flight, with an initial order for 310 airplanes. The first production fighter was delivered to the Royal Air Force 4 August 1938. Between 1938 and 1948, 20,351 Spitfires were built in 24 variants.

Captain Joseph Summers, C.B.E., was born 10 March 1904. He was the older brother of Group Captain Maurice Summers, who was also a test pilot for Vickers. In 1922, he married Miss Dulcie Jeanette Belcher at Sculcoates, Yorkshire. They would have several children.

In 1924, Summers received a short-service commission as an officer in the Royal Air Force. He trained as a pilot with No. 2 Flight Training Squadron, at RAF Duxford. He was hospitalized for six months, which delayed his training, but he graduated in 1924 and was assigned to No. 29 Fighter Squadron. Summers was considered to be an exceptional pilot, and with just six months’ operational experience, he was assigned as a test pilot at the Aircraft and Armaments Engineering Establishment (A&AEE) at RAF Martlesham Heath. He remained there for the reminder of his military service. In June 1929 he became a test pilot for Vickers Ltd. (Aviation Department). He became the company’s chief test pilot in 1932.

“Mutt’s approach to test flying was much more in sympathy with the knee-pad than with the complicated automatic observers which nowadays are an indispensable part of test flying. He vigorously defended the feel of an aeroplane as measured by his hand or by the seat of his pants, and I believe was always suspicious of the scientific approach. . . One learned never to regard his criticism or advice lightly. In a world of science and instrumentation his judgement and horsesense often threw an unscientific but accurate light on some dark problem.”