13 January 2012: This McDonnell Douglas F-15E-47-MC Strike Eagle, 89-0487, became the first F-15 to have logged over 10,000 flight hours. Regularly assigned to Captain Justin Pavoni, Pilot, and Lieutenant Colonel David Moeller, Weapons System Officer and commander of the 335th Expeditionary Fighter Squadron, on the mission which achieved the milestone, 487 was flown by Captain Ryan Bodenheimer, pilot, and Captain Erin Short, WSO, the two youngest flyers in the squadron.

89-0487 was accepted by the Air Force on 13 November 1990. At the time of this event, 487 was considered to be the flag ship of the 335th Expeditionary Fighter Squadron. During a three month period at Bagram Air Base, this individual F-15E flew 1,200 hours and dropped 15% of all the bombs dropped by the squadron.

This airplane is still in service with the United States Air Force. It passed 12,000 flight hours on 16 August 2016. It has been deployed for combat operations 17 times.

The Strike Eagle was begun as a private venture by McDonnell Douglas. Designed to be operated by a pilot and a weapons system officer (WSO), the airplane can carry bombs, missiles and guns for a ground attack role, while maintaining its capability as an air superiority fighter. It’s airframe was a strengthened and its service life doubled to 16,000 flight hours. The Strike Eagle became an Air Force project in March 1981, and  went into production as the F-15E. The first production model, 86-0183, made its first flight 11 December 1986.

Though optimized as a fighter-bomber, the F-15E Strike Eagle retains an air-to-air combat capability. The F-15E is armed with one 20mm M61A1 Vulcan 6-barrel rotary cannon with 512 rounds of ammunition, and can carry four AIM-9M Sidewinder heat-seeking missiles and four AIM-7M Sparrow radar-guided missiles, or a combination of Sidewinders, Sparrows and AIM-120 AMRAAM long range missiles. It can carry a maximum load of 24,500 pounds (11,113 kilograms) of bombs and missiles for ground attack. 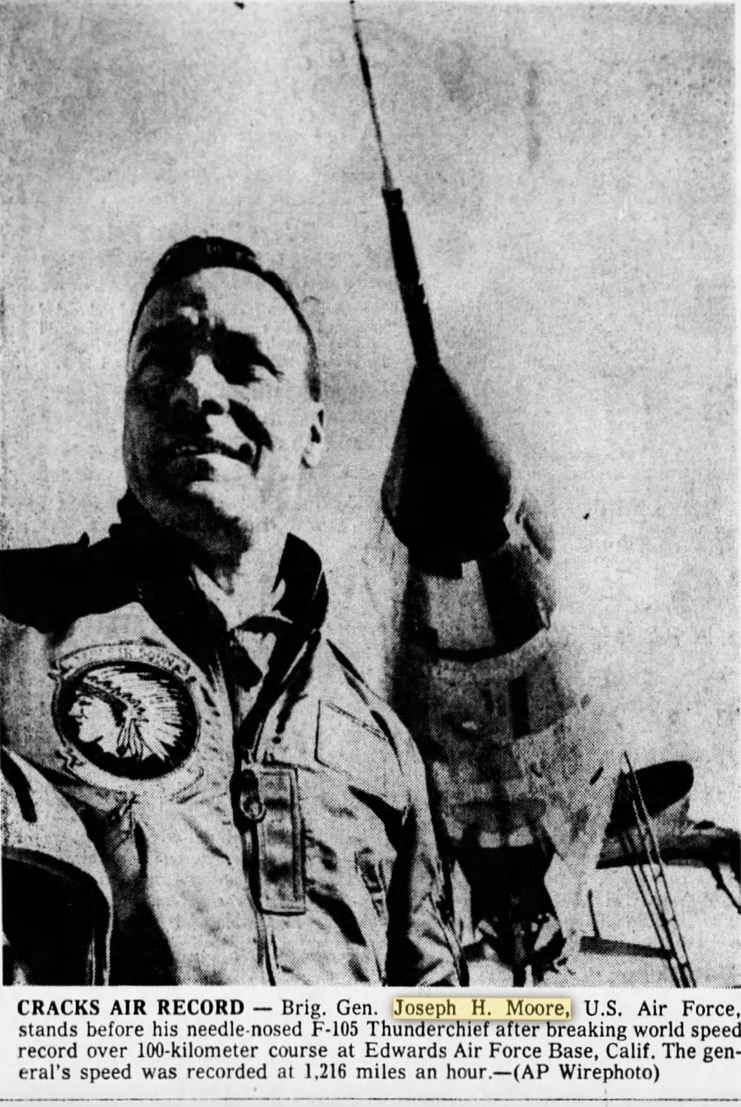 Moore emphasized at a press conference yesterday morning at International Airport here that the new mark has not yet been officially verified by the National Aeronautic Association.

HE SAID he would attempt the flight again if the NAA does not recognize the new mark.

The general, a combat pilot with 100 missions during World War II who holds many decorations, said he broke the record twice Friday. His “slowest” speed was 1,170 miles an hour, some 70 miles an hour over the French record.

MOORE, 40, soft spoken with a faint Southern drawl, was met at the airport yesterday by his son, 1st Lt. Joseph Moore, a gunnery instructor with the Air Force at Williams Air Force Base, Ariz.

The general stressed that his plane was a production model, equipped with ammunition and cannon just as it would be in combat. He said that some of the plane’s instruments had been removed to make room for scientific equipment.

According to Moore, he actually hit a top speed of 1,400 miles an hour in “coming through the gate” at the end of his run around the circular course, about which he was guided by radio and scientific instruments.

Armament consisted of one 20 mm General Electric M61 Vulcan six-barreled Gatling gun with 1,080 rounds of ammunition. It had an internal bomb bay and could carry bombs, missiles or fuel tanks on under wing and centerline hardpoints. The maximum bomb load consisted of fourteen 750-pound (340 kilogram) bombs. For tactical nuclear strike missions, the F-105B could carry one Mk 28 “special store” in the internal bomb bay.

Republic Aircraft Corporation built 833 Thunderchiefs for the U.S. Air Force. 75 of those were F-105Bs. 372 F-105s were lost to enemy action in South East Asia.

“Six pilots of the 17th and 18th Tactical Reconnaissance Squadrons of the 363rd Tactical Reconnaissance Wing were chosen for Operation Sun Run. Each prepared for the round-trip flight, since they would not know which flight they were assigned until a few days before the operation. All six pilots had extensive experience in photo reconnaissance aircraft, although the RF-101 was relatively new to Tactical Air Command.

“The success of Operation Sun Run also depended on the performance of the newly available KC-135 Stratotanker, the USAF’s first jet tanker. The KC-135’s speed allowed the RF-101s to refuel at an altitude of 35,000 feet and a speed of Mach 0.8. Crews from Strategic Air Command and Air Force Research and Development Command prepared for the 26 refuelings the Operation Sun Run RF-101Cs would require.

“At 6:59 a.m., 27 November 1957, Capt. Ray Schrecengost took off from Ontario International Airport near Los Angeles on the first RF-101C round-trip flight of Operation Sun Run. Next into the air were Capt. Robert Kilpatrick on his one-way flight and Capt. Donald Hawkins, flying back-up. Capt. Hawkins followed until the first refueling was complete, and then flew to March Air Force Base, Calif. At 7:50 a.m., Capt. Robert Sweet took off on the second round-trip flight. Lt. Gustav Klatt followed, beginning his one-way trip. Their backup, Capt. Robert Burkhart, also flew to March Air Force Base after the first successful refueling.

The RF-101C was unarmed. It carried six cameras in its nose. Two Fairchild KA-1s were aimed downward, with four KA-2s facing forward, down and to each side.

A McDonnell Aircraft Corporation film about Operations Sun Run and Fire Wall is available on YouTube:

The construction materials took advantage of plentiful supplies of wood, and also made workers who were not in the standard metal aircraft industry able to take part.

The prototype was rolled out 19 November 1040, painted overall yellow.

6,411 DH.98 Mosquitoes were built in England, 1,134 in Canada and 212 in Australia. It was produced in bomber, fighter, night fighter, fighter bomber and photo reconnaissance versions.

W4050’s (the prototype’s Royal Air Force identification) fuselage was damaged while taxiing at Boscombe Down, 24 February 1941, and had to be replaced with one intended for a second prototype, W4051. It remained at de Havilland and was used to test different engines, armaments and versions. After a series of tests conducted in December 1943, the prototype Mosquito was permanently grounded. It was used as an instructional airframe and later placed in storage.

In September 1958, W4050 was turned over to the de Havilland Aircraft Heritage Centre. Today, the restored prototype DH.98 Mosquito is at the museum at London Colney, Hertfordshire, England.