Explorer 1 was designed and built by the Jet Propulsion Laboratory (JPL) at the California Institute of Technology, Pasadena, California. The satellite carried a cosmic ray detector, internal and external temperature sensors, and a micrometeorite detector. Powered by batteries, it transmitted data for 105 days.

The second stage consisted of a cluster of 11 JPL “Baby Sergeant” solid-rocket boosters, producing a total of 16,500 pounds of thrust (73.40 kilonewtons) and burned for 6.5 seconds. These were scaled-down version of the Thiokol XM100 Sergeant booster. They were 3 feet, 10 inches (1.168 meters) long and 6.00 inches (15.24 centimeters) in diameter. Each booster contained 50 pounds ( kilograms) of solid fuel. The second stage weighed 1,020 pounds (463 kilograms).

The third stage was powered by three Baby Sergeant boosters, producing 4,500 pounds of thrust (20.02 kilonewtons). These were clustered inside the second stage boosters, and both the second and third stage were covered by a fiberglass “tub” which could be spun up to 750 r.p.m. to stabilize the rocket after launch. The third stage weighed 280 pounds (127 kilograms).

Explorer 1 remained in orbit for 12 years, 2 months and 1 day. On 31 March 1970, its orbit decayed and the satellite re-entered Earth’s atmosphere over the Pacific Ocean and was destroyed.

The mission of Mariner 4 was to “fly by” Mars to take photographic images and gather scientific data, then relay this to tracking stations on Earth. The spacecraft carried an imaging system, cosmic dust detector, cosmic-ray telescope, magnetometer, radiation detector, solar plasma probe and an occultation experiment.

The rocket, a “1-½ stage” liquid-fueled Atlas LV-3, number 228, was built by the Convair Division of General Dynamics at San Diego, California. It was developed from a U.S. Air Force SM-65 Atlas D intercontinental ballistic missile, modified for use as an orbital launch vehicle.

The second stage was an Agena D, built by Lockheed Missiles and Space Systems, Sunnyvale, California. The Agena D was 20 feet, 6 inches (6.299 meters) long and had a maximum diameter of 5 feet, 0 inches (1.524 meters). The single engine was a Bell Aerosystems Company LR81-BA-11, with 16,000 pounds of thrust (71.1 kilonewtons). It was also liquid fueled, but used a hypergolic mixture of nitric acid and UDMH. This engine was capable of being restarted in orbit.

27 August 1962: At 06:53:14 UTC (2:53 a.m., Eastern Daylight Time), Mariner 2 lifted off from Launch Complex 12 at Cape Canaveral Air Force Station, Florida, aboard an Atlas-Agena B launch vehicle. This was the second space probe to be sent to Venus.

Mariner 1 and 2 were identical space probes built by the Jet Propulsion Laboratory (JPL) of the California Institute of Technology (Caltech), Pasadena, California. The spacecraft were designed to obtain radiometric temperatures of Venus, and to measure the Interplanetary Magnetic Field.

The Mariner 1 mission failed when the launch vehicle veered off course and was destroyed by the Range Safety Officer, 4 minutes, 53 seconds into its flight, 22 July 1962. 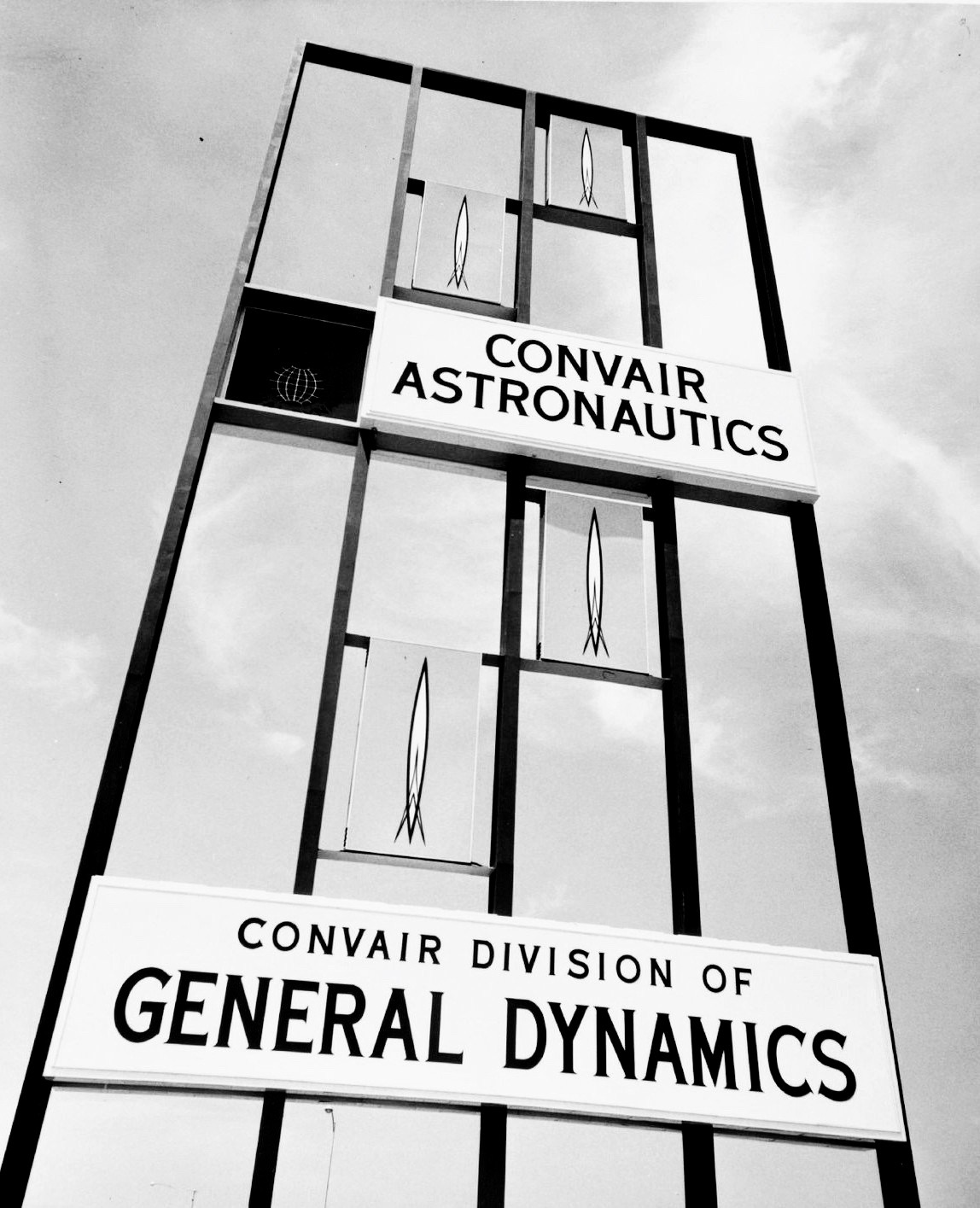 The Atlas Agena B combined an Atlas LV-3A rocket with an Agena B upper stage. The Atlas was derived from the U.S. Air Force SM-65 Atlas intercontinental ballistic missile (ICBM), and was built by the Convair Division of General Dynamics at San Diego, California.

The LV-3A is a “1-½ stage” liquid-fueled rocket with three engines. The “half-stage,” was a booster section consisting of two LR89-NA-5 rocket engines. This stage produced approximately 369,800 pounds of thrust (1,645 kilonewtons). The center, or “sustainer,” engine is a LR105-NA-5, rated at 86,800 pounds of thrust (386 kilonewtons). Both engines were built by the Rocketdyne Division of North American Aviation, Inc., at Canoga Park, California. The Atlas rocket used liquid oxygen and RP-1 (a highly-refined kerosene) propellant. The LV-3A had a total thrust of 456,587 pounds (2,031 kilonewtons).

The second stage was an Agena B, built by Lockheed Missiles and Space Systems, Sunnyvale, California. This engine was capable of being restarted in orbit. The Agena B was 7.20 meters (23 feet, 7 inches) long and had a maximum diameter of 1.50 meters (4 feet, 11 inches). It was also liquid fueled, but used a hypergolic mixture of nitric acid and UDMH. The single engine was a Bell Aerosystems Company LR81-BA-7, with 16,000 pounds of thrust (71.1 kilonewtons).

At liftoff, all three main engines were burning. After 2minutes, the two-engine booster assembly was jettisoned and the vehicle continued with the center LR105 sustainer. After 4 minutes, 25 seconds, this engine shut down and the Agena second stage separated. At this point, guidance was lost and the vehicle began to roll, but did not deviate significantly from the planned trajectory. About a minute later, guidance was restored and the mission continued.

The Agena B second stage placed the Mariner in a parking orbit at about 118 kilometers (73.3 miles) altitude. 16 minutes, 20 seconds later, the Agena engine was reignited and  Mariner 2 was then placed on a trajectory planned to take it to Venus.

24 July 1950: The first rocket launch at Cape Canaveral, Florida, took place. Bumper 8 was a two-stage rocket consisting of a captured German V-2 ballistic missile as the first stage and a WAC Corporal sounding rocket as the upper, second, stage. The rocket lifted off from Launch Complex 3 at the Cape Canaveral Air Force Station and followed a ballistic trajectory over the Joint Long Range Proving Ground. This was a low-angle atmospheric flight. The WAC Corporal reached an altitude of 10 miles (16.1 kilometers) and traveled 200 miles (322 kilometers) downrange.

The Bumper Project was a U.S. Army Ordnance Corps program, with overall responsibility contracted to the General Electric Corporation. The V-2s used in the Bumper Project were modified at accept the WAC Corporal second stage. Compressed air was used to separate the stages after the V-2 engine was cut off.

The V2, or Vergeltungswaffen 2 (also known as the A4, Aggregat 4) was a ballistic missile weighing 28,000 pounds (12,500 kilograms) when fully loaded. It carried a 2,200 pound (1,000 kilogram) explosive warhead of amatol, a mixture of TNT and ammonium nitrate. Propellant was a 75/25 mixture of of ethanol and water with liquid oxygen as oxidizer.

At the end of World War II, many V-2 rockets and components were captured by Allied forces and were brought to the United States for research, along with many of the German engineers, scientists and technicians who had worked on the German rocket program. Others were captured by the Soviet army.

The WAC Corporal was a liquid-fueled hypergolic rocket. After separation from the first stage, the WAC Corporal was capable of reaching more than 80 miles (129 kilometers). It was designed by the Jet Propulsion Laboratory in Pasadena, California, and built by Douglas Aircraft. The rocket carried small research packages into the upper atmosphere. The two-stage rocket was used to develop launch techniques and to refine the separation of upper stages at very high speed.

Now named the Kennedy Space Center, but known simply as “The Cape,” the location was selected to allow rocket testing to take place over the Atlantic Ocean, minimizing danger to persons and property. As one of the points within the United States closest to the Equator, rockets launched on an eastward trajectory receive additional velocity due to the Earth’s rotation.

Mariner 4 was a 260.68 kilogram (574.70 pounds) interplanetary spacecraft, controlled by radio signals from Earth. It was launched 28 November 1964 from Launch Complex 12 at the Kennedy Space Center, Cape Canaveral, Florida. The launch vehicle was a three-stage liquid-fueled Atlas D/Agena rocket.